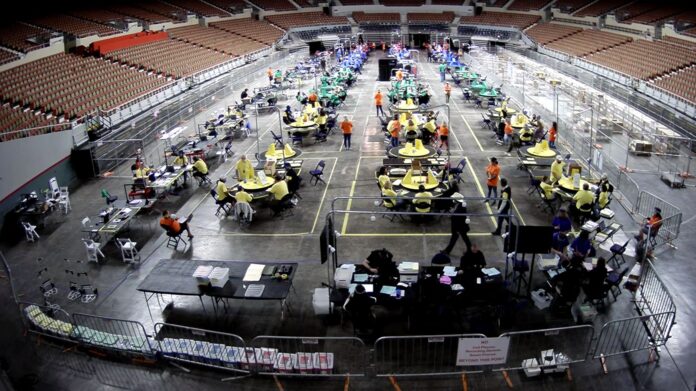 The new guidance document summarizes the Biden administration’s position on federal law concerning audits, deeming the round of reviews that are either complete, in progress, or being proposed to be “unusual” and “exceedingly rare,” while highlighting that federal law imposes constraints under which counties and states must comply.

The former makes it the duty of election officials to maintain the security and integrity of the records and safeguard their chain of custody, “so that a complete and uncompromised record of federal elections can be reliably accessed and used in federal law enforcement matters,” the document states.

“Where election records leave the control of elections officials, the systems for maintaining the security, integrity, and chain of custody of those records can easily be broken. Moreover, where elections records are no longer under the control of elections officials, this can lead to a significant risk of the records being lost, stolen, altered, compromised, or destroyed. This risk is exacerbated if the election records are given to private actors who have neither experience nor expertise in handling such records and who are unfamiliar with the obligations imposed by federal law.”

The Republican-controlled Arizona Senate ordered an audit of the Nov. 3, 2020, election results in Maricopa County, Arizona, tapping Florida-based Cyber Ninjas, which had no election audit experience, to perform the task.

Violators of the Civil Rights Act face fines of up to $1,000 and a jail sentence of up to one year for each violation.