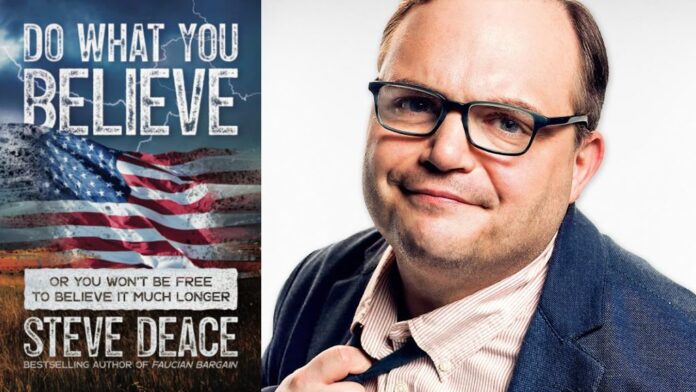 “Steve Deace is a hero. He has written this spectacular how-to guide for Christians to know precisely how to shine our lights brightly amidst the darkness threatening America at this crucial time!” —Eric Metaxas, #1 New York Times bestselling author of Bonhoeffer, If You Can Keep It, and Is Atheism Dead

It’s been over forty years since The Christian Manifesto cast a vision for religious believers to wage the culture war, and now it’s time for a new generation to arise and answer history’s call in our time.

This time the soul of America really is at stake. Sure, for many years we’ve heard this language dramatically and cynically utilized during political campaigns, but this time it’s actually true. American Exceptionalism faces more systemic threats and existential peril than ever before. A culture that can’t agree on what a border, citizen, criminal, law, constitution, life, or even the truth is probably doesn’t have long to last. But as Jesus warned in Matthew 9:37, “The harvest is plenty but the workers are few.” Either we will stand boldly now for what we believe, or our way of life will be lost to the ash heap of history. Pilgrims “having undertaken the glory of God” and Great Awakenings are what gave birth to liberty on this continent in the first place. And without a revival of those first things in our time, that liberty will be lost for good.

This will be the generation that determines the fate of the West. Do What You Believe is a blueprint and battleplan for such a time as this.

Steve Deace is on BlazeTV radio and podcast for two hours each weekday, right after Glenn Beck. He’s also the author of several books and is a prolific writer. His 2013 column defending Duck Dynasty and traditional American values was the second most read column of the year for USA Today. In addition to USA Today, he’s also been a contributor to Breitbart, Business Insider, Townhall, and Politico.

National media coast-to-coast recognize Deace as an influential voice in his home state of Iowa’s first in the nation caucuses. He’s frequently been quoted in the national media on political issues, especially presidential politics. Deace has also appeared on all three major cable news networks.

Steve Deace lives in Iowa with his wife, Amy, and their three children — Anastasia, Zoe, and Noah. You can visit his website at www.blazetv.com/deace to learn more.