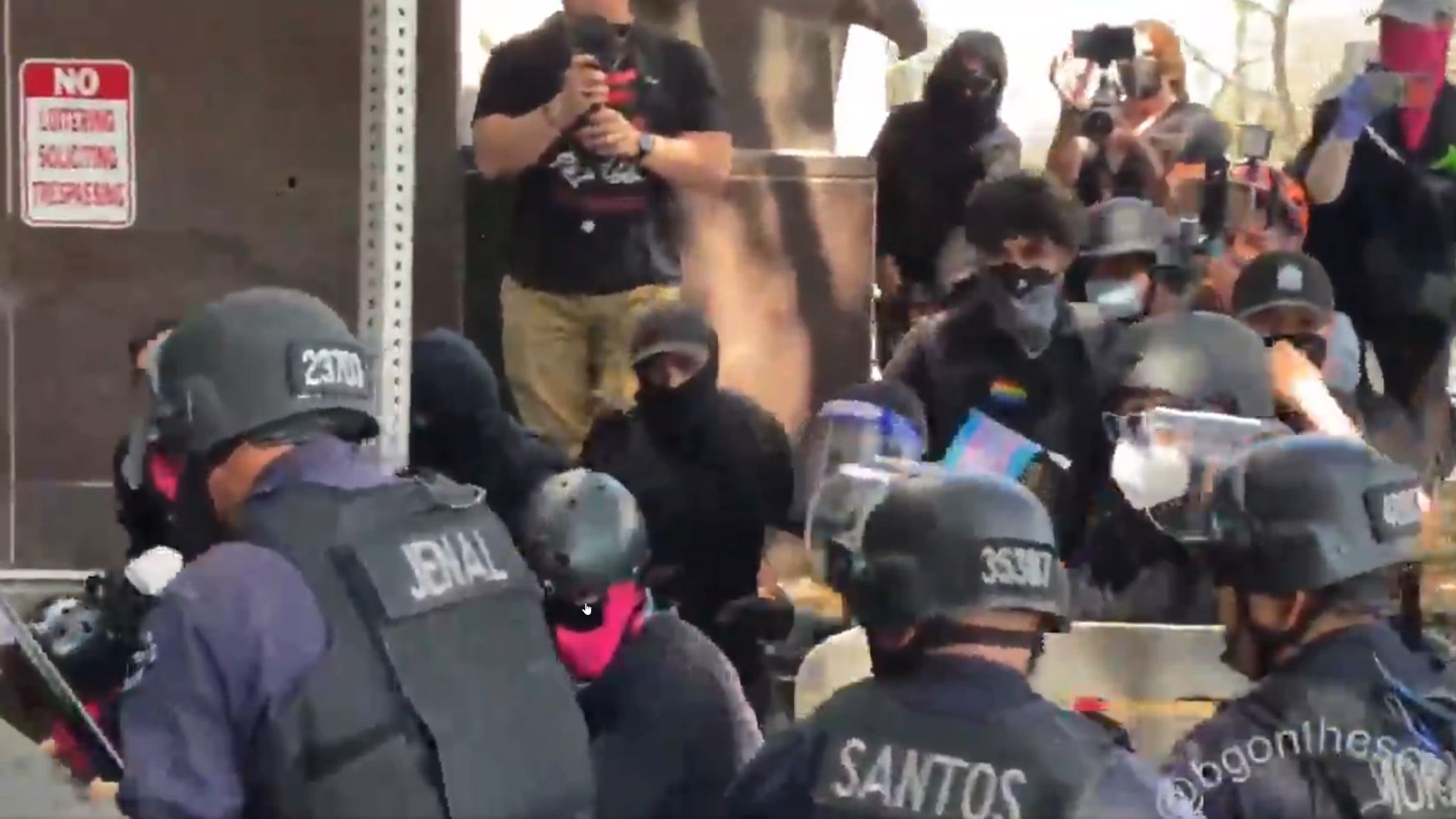 Protesters and counter-protesters clashed at a Korean spa in Los Angeles after a customer complained in a viral video of a biological male allegedly disrobed in a women’s area.

LAPD officers were also spotted pushing back pro-LGBT counter-protesters and declared the scene an unlawful assembly, the footage showed.

Los Angeles: Police beat back antifa after they hurled projectiles at the officers. Antifa gathered today to again oppose a group of conservatives protesting the WiSpa where a person allegedly exposed their penis to women & girls. pic.twitter.com/xGmPAPTkSh

In a tweet at around 3 p.m. on Saturday, the department confirmed that several dozen people were arrested after failing to leave the area. “Numerous weapons” were also found at the scene, the LAPD wrote, including “knives and mace.”

Smoke bombs and other projectiles were also thrown at officers, the department’s headquarters said in a tweet. The department included images of the alleged weapons, including “a stungun,” and other objects that were thrown.

“This morning, LAPD was in the area of Wilshire and Rampart,” LAPD Detective Meghan Aguilar told news outlets on Saturday, elaborating on the situation. “We were there to facilitate areas for two different protest groups. Around 11:10 [a.m.], there were clashes between the groups, and smoke bombs and projectiles were thrown at police officers. That prompted there to be an unlawful assembly declared. Everyone in the vicinity was told to leave the area. Most people did follow the instructions, although there were several dozen who ultimately ended up being arrested.”

And during the incident, the LAPD apparently sent out an emergency alert telling people nearby to disperse.

At a protest near Wilshire Bl & Rampart Bl, 2 groups clashed. Smoke bombs/projectiles were thrown at ofcrs & a dispersal order was issued. Several dozen people were arrested. Numerous items in violation of 55.07 LAMC were found discarded including a stungun, knives, pepper spray pic.twitter.com/exk7vvTfRm

The Wi Spa has been the site of a prior protest and clashes after the viral video was uploaded several weeks ago. In the clip, a woman, who some said is African-American, is heard complaining to the Wi Spa’s staff that a biological male walked into the women’s section and exposed himself to girls. The customer reportedly identified himself as a transgender woman.

“He is a man,” the woman is heard saying. “He is not a female. There are girls down there, other women who are highly offended by what they just saw and you did nothing. You sided with him.”

At the time, Wi Spa appeared to confirm the incident and defended its policy of allowing biological males who identify as female to use the women’s bathroom.