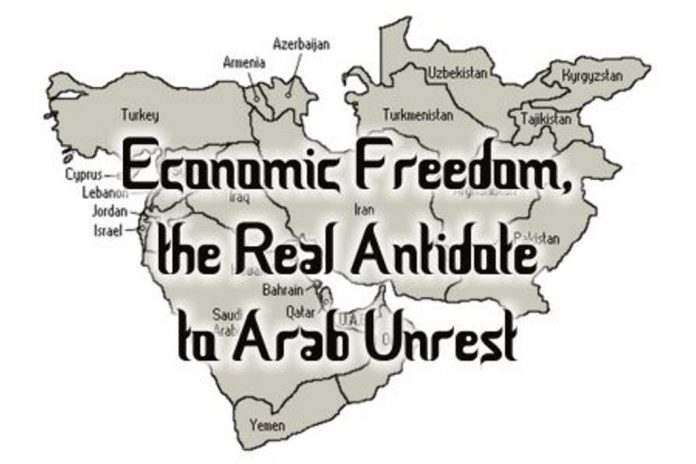 By Ambassador Terry Miller ~ The Washington Times – The recent attacks on U.S. diplomatic outposts in the Middle East are certainly disappointing, but the U.S. still has a big opportunity to exert a positive influence in the region. An often overlooked contributor to the region’s highly combustible condition is a pervasive lack of economic opportunity and economic freedom. Our free market system is just what the region needs.

To date, the U.S. has struggled to find a policy that can simultaneously promote freedom and stability in the Arab world. The focus on democracy has produced little success. The jury is still out on the ultimate character of new regimes in Tunisia, Egypt and Libya, but the recent assaults on U.S. missions show that volatility and anti-Americanism remains high there.

Governments are tottering in Syria and Yemen, and massive U.S. interventions in Iraq and Afghanistan have failed to fully secure either peace or security. Thirty years of efforts to influence post-revolutionary Iran have left that country an international pariah and potential nuclear threat to its neighbors. It’s not a pretty record.
The nub of the problem is that purely political revolutions are inherently destabilizing. From the reign of terror that followed the French Revolution right through the “democratically” installed Communist and Nazi regimes of 20th century Europe to the postcolonial dictators dominating Africa today, it is an unfortunate truth that political revolutions lead as often to tears as to utopia. We are crying in the Middle East today.
Economic liberalization offers a better path to revolutionary change. Free markets, based on the voluntary decisions of individuals, facilitate win-win transactions. Both sides gain, or else the interactions don’t happen. Free markets require no central guide, and no government plan. When individuals can decide for themselves what to do, there is little need for collective action. You don’t need a mob, or an officious and corrupt government bureaucrat, to influence the outcome or defend your interests.

It was an economic grievance that inspired Mohamed Bouazizi, a young Tunisian street vendor, to set himself on fire and, thus, spark the conflagration we know as the Arab Spring. What had frustrated Bouazizi’s attempts to earn a living was government regulation and corruption. The humiliation and helplessness he experienced is inflicted daily on millions of Arabs who live without economic freedom and any hope of betterment.
The Middle East lags in many areas of economic freedom. Overall unemployment in the region tops 10 percent, and for youth, it’s much worse. More than 25 percent of those younger than 25 can’t find jobs.

A chapter in the latest Heritage Foundation Index of Economic Freedom explored the link between corruption and terrorism in the region and concluded that the motivation for terrorism is likely “less about Islam against Western values and more about revenge against corrupt regimes in the Middle East.”

If that is true, we are not going to help the people of the Middle East, or indeed preserve our own security, by fomenting political revolution, or by helping dictators resist it. We might succeed, however, by helping put Arab societies on the path to economic freedom. We can lower our own barriers to trade and encourage governments in the Middle East to do likewise. We can encourage reforms to open up investment, create jobs and empower individuals economically.

The American free-market system is unmatched in scale and in its commitment to individual freedom. Through it, we have created the most prosperous society in the history of the world. This — more than our democracy, our respect for human rights or our military might — is the face of America we need to show the struggling youth of the Middle East right now. Economic freedom won’t solve every problem in the region, but an economic revolution there can bring immediate and lasting benefits without inspiring resentment or violence. That is surely a worthy goal for American policy, and one with a fair chance of success.
• Terry Miller is director of the Heritage Foundation’s Center for International Trade and Economics and the think tank’s Mark A. Kolokotrones Fellow in Economic Freedom.

First appeared in The Washington Times.