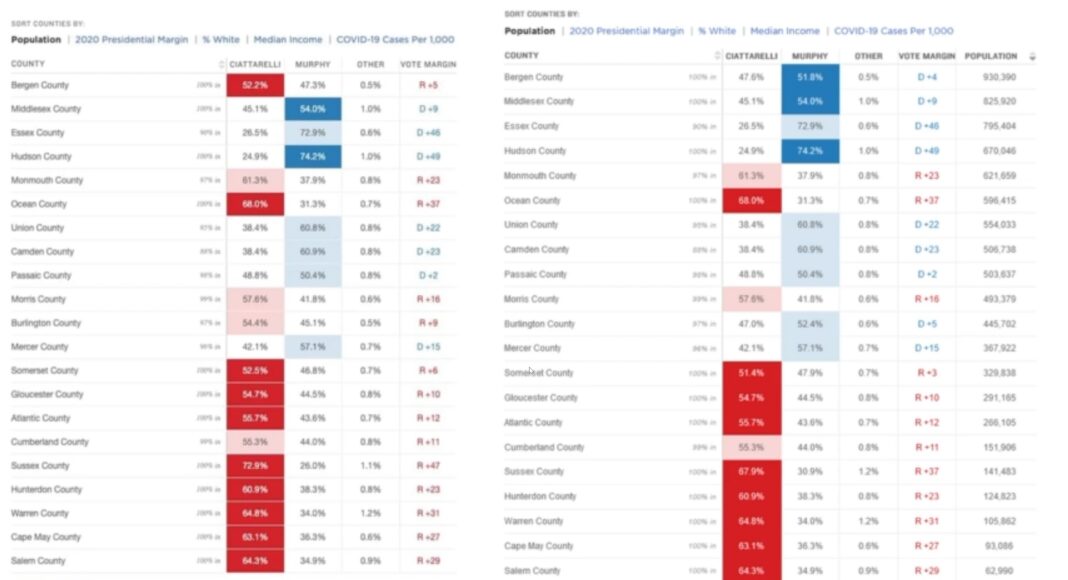 In the New Jersey Governor’s race Republican Jack Ciattarelli was leading Phil Murphy in Bergen County with 100% of the vote in. Then late into the evening votes were flipped.

Moments later, with 87% of the vote counted, the results in Bergen County changed and suddenly Murphy was reported ahead in the county with 51% of the vote.  Ciattarelli’s 42,000 vote lead in the state dwindled to a 1,600 vote lead.

Well, would you look at this. Jack Ciattarelli just moments ago with 83% of the vote in, with a strong 42,000 vote lead. Now if you’ll look to the left here, you’ll see that Bergen County, the very top ,the biggest County in all New Jersey, with 100% reporting, shows Ciattarelli winning 52% to 47%, okay, a hundred percent reporting. But now, miraculously, with 87 per cent in Bergen County which was 100% reported, all of a sudden, just happened to flip. Boy, those must have been some magic votes to flip a a hundred percent counted County. Despite being at 100% and staying exactly the same all the way up until now, and oh look, now Ciattarelli, instead of having a 42,000 vote lead, only has a 1,600 vote lead. Boy, if there was ever a state that needed the damn audit of like every election we’ve ever held, its New Jersey. So once again that’s Bergen County red for Ciattarelli all night with 100% reported, until the zero hour when all the new station start shutting down and they think no one’s paying attention, and then oops it all of a sudden flips to blue and there goes Ciattarelli lead. The same sort of shady vote flipping we watched in the 2020 election. Audit New Jersey.