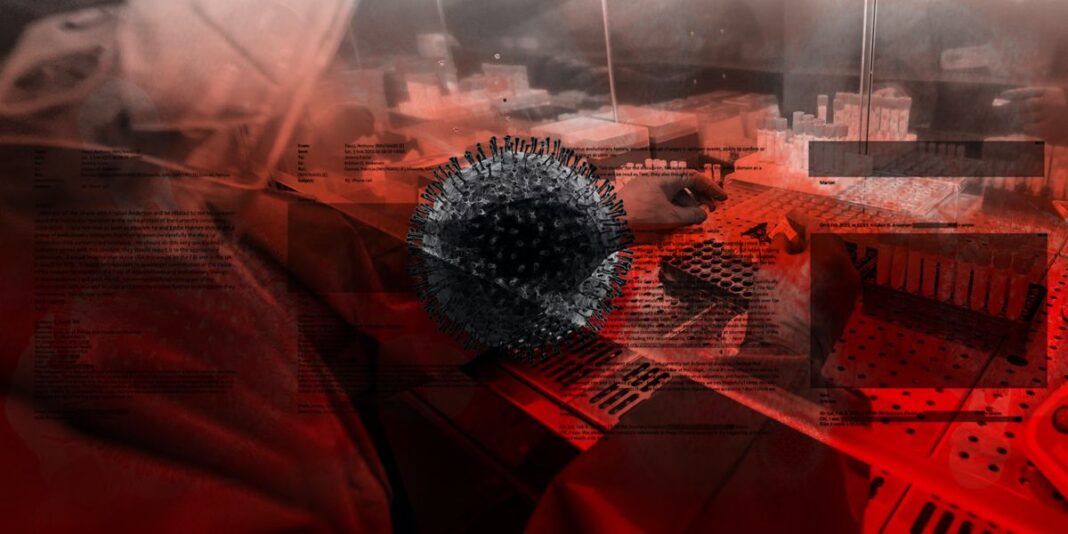 As COVID-19 WAS spreading fear and spurring lockdowns across the United States in early 2020, the scientific journal Nature Medicine published a paper on March 17 titled “The Proximal Origin of SARS-CoV-2.” Written by five renowned academic scientists, it played an important early role in shaping the debate about a fiercely controversial topic: the origin of the virus that has killed millions since it emerged in Wuhan, China, in late 2019. Did it spill from animals to humans in nature, on a farm, in a market? Or did it leak from a lab like the Wuhan Institute of Virology, a leading center of coronavirus research in China? Drawing on “comparative analysis of genomic data,” the paper’s authors wrote that “our analyses clearly show that SARS-CoV-2 is not a laboratory construct or a purposefully manipulated construct.” Toward the end of the paper, they added, “we do not believe that any type of laboratory-based scenario is plausible” in explaining the origin of the virus. Instead, the scientists strongly favored a natural origin, arguing that the virus likely spilled from bats into humans, possibly by way of an intermediate animal host.

The peer-reviewed paper proved to be hugely influential. Dr. Francis Collins, then the director of the National Institutes of Health, or NIH, announced its findings in a post on the agency’s website in late March 2020. When asked during an April 17 press briefing at the White House about concerns that SARS-CoV-2 had come out of a lab in China, Dr. Anthony Fauci, who recently stepped down as head of the National Institute of Allergy and Infectious Diseases, referenced the paper, describing its conclusions and calling its authors “a group of highly qualified evolutionary virologists.” The paper has been accessed online more than 5.7 million times and has been cited by more than 2,000 media outlets. ABC News, for instance, ran an article on March 27 titled “Sorry, Conspiracy Theorists. Study Concludes Covid-19 ‘Is Not a Laboratory Construct.’” In that article, one of the paper’s authors, Robert Garry, is quoted saying, “There’s a lot of speculation and conspiracy theories that went to a pretty high level, so we felt it was important to get a team together to examine evidence of this new coronavirus to determine what we could about the origin.”

What that quote didn’t quite convey was that Garry and several of the paper’s other co-authors were themselves initially suspicious that SARS-CoV-2 may have emerged from a lab. They communicated their suspicions to Fauci, Collins, and others in late January and early February 2020, and what ensued was a period of intense and confidential deliberation about the origin of the virus.

Unredacted records obtained by The Nation and The Intercept offer detailed insights into those confidential deliberations. The documents show that in the early days of the pandemic, Fauci and Collins took part in a series of email exchanges and telephone calls in which several leading virologists expressed concern that SARS-CoV-2 looked potentially “engineered.” The participants also contemplated the possibility that laboratory activities had inadvertently led to the creation and release of the virus. The conversations convey a sense of anxious urgency and included speculation about the specific types of laboratory techniques that might have caused the virus’s emergence. After roughly a week of debate and data collection, one of the key figures involved in the deliberations characterized the focus of the group’s work as follows: “to disprove any type of lab theory.” Several of the scientists on the calls and emails then went on to write and publish “Proximal Origin.” It became one of the best-read papers in the history of science.