President Joe Biden’s open border policy, coupled with a court’s decision this week to block COVID-19 deportations, could open the door to an illegal migrant wave of 18,000 a day — nearly double the already historically high flow.

If the prediction from an influential former immigration judge proves true, that would be about half a million migrant encounters a month at the southern border, up from 230,000 last month. That’s equivalent to about the population of Atlanta entering every month.

“That would be a 173% increase over October’s dismal numbers, and would effectively end any hope of controlling the border. In fact, it would end the border as any sort of boundary at all,” said Andrew Arthur, who was an immigration judge for eight years and is now a resident fellow in law and policy at the Center for Immigration Studies.

He blamed the additional likely surge on a judge’s decision this month blocking the Biden administration from using a health law to turn back those suspected of having COVID-19 under Title 42.

Noting that just 17,000 border agents are stationed along the U.S.-Mexico line, Arthur said that the government faces a “wake-up call” when the COVID-19 order finally goes into effect.

In a new blog post, he wrote, “Biden and Congress now have to make a choice: Do they want the catastrophe unfolding at the Southwest border — which in the words of the FBI director is ‘contribut[ing] to the violent crime crisis here’ — to continue, or do they want to enforce the law and make it stop?” 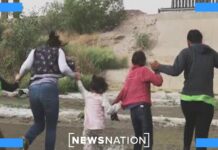