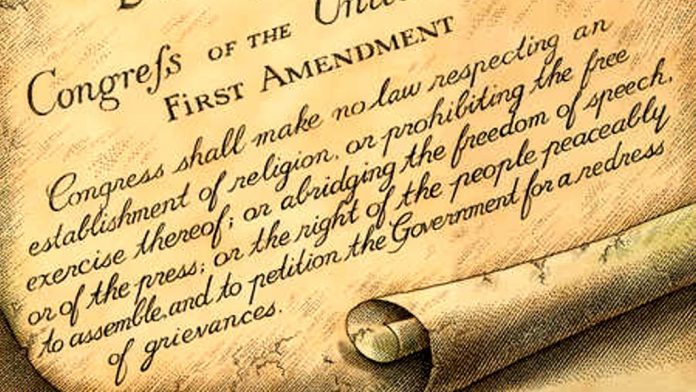 An article in the Saturday Evening Post discusses the First Amendment to the Constitution which states, “Congress shall make no law… abridging the freedom of speech.” However, Americans don’t have the luxury of always saying whatever they want. It states that your right to free speech is limited by where you are, what you say, and how you say it.

Here are the six areas where you can be held liable in criminal or civil court for your speech.

It is normally publications (a form of speech as far as the courts are concerned) that must deal with legal cases concerning sex and free speech. Obscenity is not protected by the Constitution, but it has been difficult to define what is obscene. In 1973, the Supreme Court, in Miller v. California, came up with a three-part definition of obscene material. A work is legally considered obscene if

This limit on obscene speech also applies to broadcasting. The FCC controls what is allowed on air, so you can’t broadcast sounds or images that could be offensive to your audience or use language inappropriate for children.

However, the Supreme Court has, so far, kept the internet free of obscenity restrictions. You can make whatever statements you want on social media sites, but the owners of those sites have the freedom to censor or delete your content if they find it offensive.

Lying is covered by the First Amendment, except when it’s not. You can be prosecuted for lying under oath in court (commit perjury). You can also be charged with misleading authorized investigators. Martha Stewart’s conviction in 2004 is an example of this. She went to prison for lying to investigators about her stock trading.

It is also illegal to run dishonest advertisements. And if you deliberately tell lies about people, you can be hit with a lawsuit in civil court for either libel (if published) or slander (if spoken).

Politicians, on the other hand, have broad protections against being prosecuted for lying, and citizens largely have free rein to criticize their governments, even if the comments are false. Luckily for late night talk show hosts, the First Amendment allows citizens to satirically mock a public figure.

If you make an offensive remark or personal insults that would immediately lead to violence you can be held accountable. You also can’t threaten violence to a specific person unless you’re making an obvious exaggeration (for instance, “I’m going to kill my opponent at the polls”). Finally, you can’t knowingly say things that cause severe emotional distress or incite others to “immediate lawless action.”

In 1951, the Supreme Court concluded in Dennis v. United States that the First Amendment doesn’t protect the speech of people plotting to overthrow the government.

While in school, students have limited rights of free speech. In 1986, Bethel School District v. Fraser upheld the right of a school to suspend a student for making an obscene speech. Hazelwood School District v. Kuhlmeier, 1988, supported a school’s right to censor student newspapers. However, many states are currently passing laws to grant broader First Amendment protections to student speech.

5. Offending Your Friends and Coworkers

In someone’s home, or in a private setting, you do not have the right to say whatever you want. Believe it or not, as an employee at your work place, you have no free-speech rights. The Constitution’s right to free speech applies only when the government — not a private entity — is trying to restrict it. As an example, an employer can legally fire an employee whose car has a campaign bumper sticker he doesn’t like.

It’s a different matter for government employees. In Elrod v. Burns, the Supreme Court ruled in 1976 that the Constitution prohibits government employers from discharging or demoting employees for supporting a particular political candidate.

Speech that shows clear intent to discriminate or sexually harass is also prohibited by law.

Also, Employees in medical or financial fields are prohibited from discussing confidential information outside of work.

The freedom of speech law has never permitted Americans to protest in any way they want. You are allowed to say what you want, but how you say it is subject to what the courts consider an appropriate time, place, and manner.

Legal authorities are responsibility to protect the safety of attendees at political gatherings and to protect the protestors themselves. However, if authorities think you pose a significant risk, you can be restricted to a Free Speech Zone. Free Speech Zones have been used since the 1980s, principally at political conventions to contain protestors.

Another place where your freedom of speech is limited is protesting in the president’s or vice president’s proximity. House Bill 347 authorized Secret Service agents to arrest anyone doing so. Secret Service also has this authority at National Special Security Events. These events have included state occasions and even basketball championships, the Academy Awards, Olympic events, and the Super Bowl. A conviction can result in up to 10 years in a federal prison.