His final goal was Detroit, where he said an uncle had a job lined up for him.

Bieya’s trip was cut short in Goliad County, some 200 miles north of the border and 150 miles shy of Houston, after the vehicle in which he was being smuggled crashed into a culvert as the driver attempted to flee local law enforcement.

He initially fled the scene, but was picked up by the sheriff that evening after walking to a road to look for water and food.

The Epoch Times spoke with 17-year-old Bieya through a translator on June 23 as he sat in the Goliad jail.

Bieya said he’s from Veracruz in eastern Mexico, where his family owns a small ranch, but he “can’t make enough money there.”

He says that in late May, he made the decision to come to the United States and called his uncle in Detroit.

“He told me he would get me to the United States,” Bieya said.

A couple of weeks later, Bieya and his father took a bus to Reynosa, a major city separated from McAllen, Texas, by the Rio Grande, which marks the international border.

In central Reynosa, the duo waited at a restaurant. They provided to the uncle their GPS location and what they were wearing, and a taxi soon arrived to take them to a stash house.

At the house, Bieya’s father bid him goodbye and got back in the taxi to return to Veracruz.

Inside the house, which Bieya said was good-looking, “not a trashy house,” four other Mexicans waited to be smuggled across the border. These weren’t the illegal crossers who turn themselves into Border Patrol for asylum, but rather, the “gotaways”—the tens of thousands who evade capture every month because they’re unlikely to qualify for any type of legal entry. 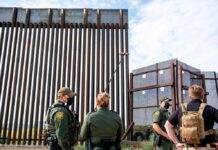