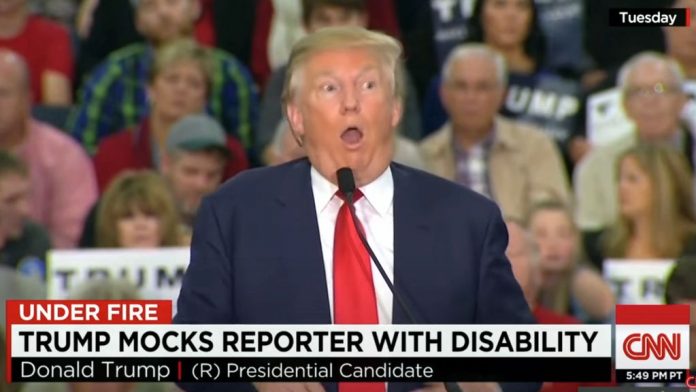 Meryl Streep, who makes millions of dollars doing what preschoolers do on the playground every day, has dragged up again the accusations that Donald Trump mocked a disabled reporter.

While making an acceptance speech earlier this month at the Golden Globe Awards, Streep said it broke her heart that “the person asking to sit in the most respected seat in our country imitated a disabled reporter, someone he outranked in privilege, power, and the capacity to fight back.”

Fake tough guy Robert De Niro followed with a letter telling her he shared her “sentiments about punks and bullies.” Trump is no delicate blossom but it’s a bit amusing watching the mafia of popular culture censure others as if it’s a bastion of geniality and tolerance.

Meryl –
What you said was great. It needed to be said, and you said it beautifully. I have so much respect for you that you did it while the world was celebrating your achievements. I share your sentiments about punks and bullies. Enough is enough. You, with your elegance and intelligence, have a powerful voice – one that inspires others to speak up as they should so their voices will be heard too. It is so important that we ALL speak up.
We love you.
Bob.

But back to the charges against Trump: Is it asking too much for these people who are constantly attacking him to actually know what they are talking about? To be honest brokers of information? To be just a bit judicious?

Quite clearly the only response has to be yes, it is too much. Because if they were to deal with the facts, their meme would collapse.

In the incident in question Trump supposedly mocked New York Times reporter Serge Kovaleski, whose hand and arm movement on his right side is impaired due to arthrogryposis. Video from 2015 seems to indicate that Trump was indeed cruelly imitating the man.

But the media are too lazy and those suffering from Trump Derangement Syndrome are too nasty and small-minded to look deeper. Trump did not mock disabled reporter, Kovalesk. The truth is, Trump has often used those same convulsive gestures to mimic the mannerisms of people, including himself, who are rattled and exasperated.

Why couldn’t the mainstream media look this up? Gavin McInnes of TheRebelMedia.com and Taki’s Magazine did, and he has the video evidence to show that Trump has a history of flailing his arms to make a point. It isn’t something he reserved for Kovaleski.

McInnes wasn’t alone — Catholics 4 Trump ably made the same case. So have others. If these people could do the research, why couldn’t the legacy media, with all its resources, do the same?

And here’s another point: Why have we seen no images of Kovaleski moving the way Trump is moving? In every video and photograph of Kovaleski we’ve seen, he is calmly standing still with his right arm held firm against his chest. He’s not waving his arms uncontrollably.

Why would Trump imitate a man who has difficulty moving at least one of his limbs by madly thrashing his own?

The answer to all these questions is this: The media and their political handlers constructed a fake news talking point against Trump and ran with it. The truth would have derailed their anti-Trump, anti-Republican, anti-conservative agenda.

This, of course, is not the only Trump lie the media and the TDR sufferers have tried to immortalize. McInnes, a controversial and provocative fellow who has described himself as a “western chauvinist” and “anarchist,” covered the Top 10 Trump Myths last week. It’s a skillful takedown of the narrative that was carefully crafted to vilify Trump — and by extension the deplorables who voted for him or against Hillary Clinton — and delegitimize his presidency.

The lesson here is while the Democrats, and the branch of the DNC that’s also known as the media, are doing all they can to smear Trump as a depraved, crude and hateful man, the people who best fit under those terms are his accusers.