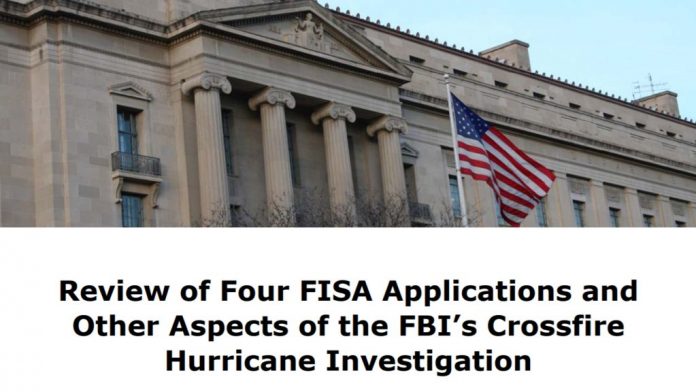 WASHINGTON – The “central and essential” evidence used to justify invasive surveillance of an American citizen in the FBI’s probe into Russian interference was, itself, an example of Russian interference, according to once-secret footnotes declassified at the urging of two U.S. Senators. The footnotes, part of the Justice Department Inspector General’s postmortem of the FBI’s flawed operation to spy on Trump campaign aide Carter Page, were released just hours after Senate Finance Committee Chairman Chuck Grassley (R-Iowa) and Senate Homeland Security and Governmental Affairs Committee Chairman Ron Johnson (R-Wis.) renewed their push for transparency. The senators expect a fuller declassification in the coming days.

The footnotes reveal that, beginning early on and continuing throughout the FBI’s Russia investigation, FBI officials learned critical information streams that flowed to the dossier were likely tainted with Russian Intelligence disinformation. But the FBI aggressively advanced the probe anyway, ignoring internal oversight mechanisms and neglecting to flag the material credibility concerns for a secret court. Despite later intelligence reports that key elements of the FBI’s evidence were the result of Russian infiltration to undermine U.S. foreign relations, the FBI still pushed forward with its probe. It would eventually spill over into the years-long special counsel operation, costing taxpayers more than $30 million and increasing partisan divisions – all based on faulty evidence. In the end, the special counsel concluded that the Trump campaign did not collude with Russia.

“For years, the public was fed a healthy diet of leaks, innuendo and false information to imply that President Trump and his campaign were part of a Russian conspiracy to spread disinformation. The FBI’s blind pursuit of the investigation, despite exculpatory and contradictory information, only legitimized the narrative. The mounting evidence undercutting this narrative should have stopped the investigation early in its tracks. Instead, it took several years and millions in taxpayer dollars to conclude that the allegations were baseless,” Grassley and Johnson said.

“Had FBI leadership heeded the numerous warnings of Russian disinformation, paid attention to the glaring contradictions in the pool of evidence and followed long-standing procedures to ensure accuracy, everyone would have been better off. Carter Page’s civil liberties wouldn’t have been shredded, taxpayer dollars wouldn’t have been wasted, the country wouldn’t be as divided and the FBI’s reputation wouldn’t be in shambles.

The IG report detailed how the FBI’s application for a Foreign Intelligence Surveillance Act (FISA) warrant to spy on Page relied heavily on an unverified dossier compiled by former British spy Christopher Steele on behalf of Fusion GPS, which was conducting opposition research for the Clinton campaign and Democratic National Committee. According to Footnote 302, in October 2016, FBI investigators learned that one of Steele’s main sources was linked to the Russian Intelligence Service (RIS), and was rumored to be a former KGB/SVR officer. However, the FBI neglected to include this information in its application, which the FISA court approved that same month. Two months later, investigators learned that Glenn Simpson, the head of Fusion GPS, told a Justice Department attorney that he assessed the same source “was a RIS officer who was central in connecting Trump to Russia.” In January, the FISA warrant was renewed.

Footnote 350 states that, in 2017, the FBI learned that intelligence reports “assessed that the referenced subset [of Steele’s reporting about the activities of Michael Cohen] was part of a Russian disinformation campaign to denigrate U.S. foreign relations.”

That same footnote states that a separate report, dated 2017, “contained information … that the public reporting about the details of Trump’s [REDACTED] activities in Moscow during a trip in 2013 were false, and that they were the product of RIS ‘infiltra[ing] a source into the network’ of a [REDACTED] who compiled a dossier of information on Trump’s activities.”

The surveillance warrant against Page was renewed two more times – in April and in June of 2017 – raising questions about when exactly the FBI received and reviewed these new intelligence reports, and what it did with them. Grassley and Johnson expect the footnotes to be further declassified in the coming days.

Citing the IG report, the FISA court ordered the FBI to explain how it will take corrective action on the FISA process. A subsequent IG audit of the FBI procedures to ensure accuracy of FISA applications found errors in 29 unrelated applications, prompting the court to order more information from the FBI.

The declassified footnotes were contained in an April 2, 2020, letter from the Justice Department responding to Grassley and Johnson’s January 28, 2020, inquiry.