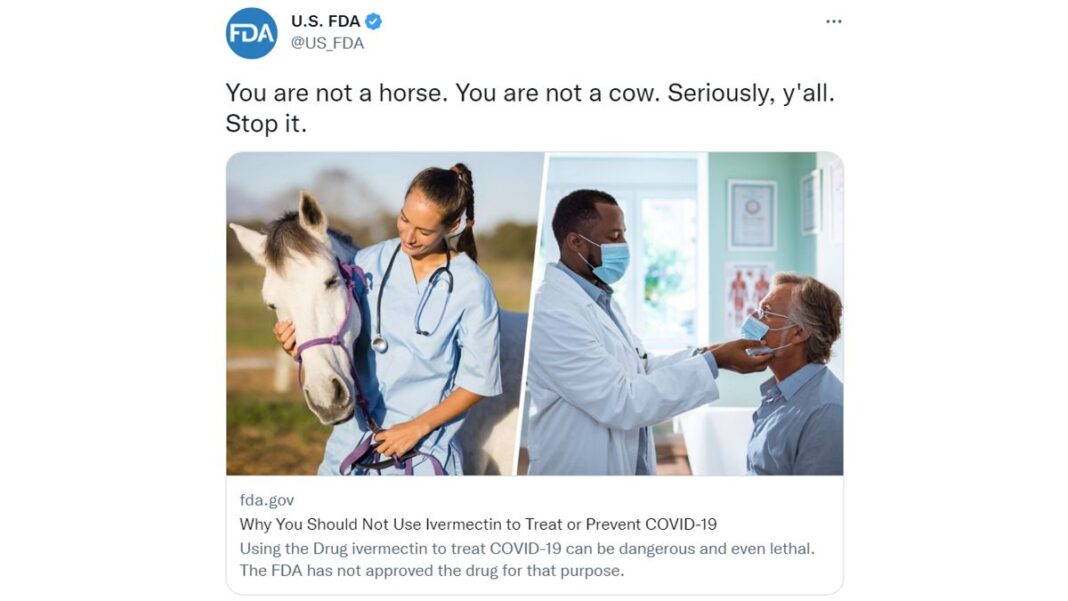 The post said: “You are not a horse. You are not a cow. Seriously, y’all. Stop it.” It linked to an FDA page that says people should not use ivermectin to prevent or treat COVID-19.

The post was created by Brad Kimberly, an FDA official, after Mississippi officials reported (pdf) an increase in calls from people who had taken ivermectin to prevent or treat COVID-19, including some who took the versions of ivermectin developed for animals.

Ivermectin is an antiparasitic that is used in both humans and animals.

Kimberly and a slew of other officials were thrilled when the post went viral, according to the emails.

The post “is the most popular post we’ve ever had on Twitter,” Erica Jefferson, an associate commissioner for external affairs, wrote in one message, adding that “we’re pleased with the response and the results.”

Jefferson was writing to Dr. Janet Woodcock, an FDA official who was acting commissioner at the time.

“That was great! Even I saw it!” Woodcock said. She said she agreed with the new strategy of being “creative and accessible” and called the missive an “excellent start.”

Jefferson said she and another team wanted to capitalize on the Mississippi warning and were able to craft the post and send it out just one day later, even though it was a Saturday.

“I’m sure you saw some of the news coming out of Mississippi on Friday regarding the use of ivermectin to treat / prevent Covid-19 and the increase in adverse events (poisonings) the state highlighted as a result of its use. I expressed to the team late Friday night that we take the opportunity to remind the public of our own warnings for ivermectin and by early Saturday morning the social media team had posted the … tweet,” Jefferson said.