A federal district court judge on May 19, 2021 rejected a motion filed on behalf of the College of the Ozarks seeking a temporary restraining order (TRO) against a new regulation barring schools from maintaining separate bathrooms and showers for male and female students.

Judge Roseann Ketchmark of the U.S. District Court for the Western District of Missouri heard arguments from both sides of the case for about two hours, then said from the bench that she was denying the motion and observed that it was “not justiciable.”

It wasn’t clear from Ketchmark’s announcement if she was referring simply to the TRO motion or more generally to the school’s suit. She said she would issue a written order soon. The judge didn’t immediately respond to a request by The Epoch Times for clarification.

In its request for the TRO, the school argued that the new regulation “interferes with the college’s speech, burdening its exercise of its moral and religious principles, and intruding upon its students’ privacy. Without emergency relief, the college must eliminate its current housing policies, cease talking to students about its policies, and stop planning for fall semester housing, all in violation of its longstanding religious beliefs, or else suffer massive fines and investigatory burdens by continuing to provide housing based on biological sex. The college thus asks this Court to enjoin the directive in order to maintain the legal status quo while this suit proceeds.”

Ketchmark was appointed to the federal bench in 2014 by President Barack Obama and confirmed by the Republican-led Senate in September 2015.

“While we’re disappointed by the court’s ruling yesterday, we are confident that the College of the Ozarks will obtain the relief that it seeks as this case moves forward,” Alliance Defending Freedom (ADF) Senior Counsel Julie Marie Blake told The Epoch Times on May 20.

The school is being represented in the litigation by ADF, which is an Arizona-based public-interest law firm that specializes in religious liberty litigation.

The firm has won 12 Supreme Court victories since 2001, including the landmark Masterpiece Cakeshop v. Colorado Civil Rights Commission, which affirmed that an individual couldn’t be required to provide a service or message that conflicted with his or her religious views. 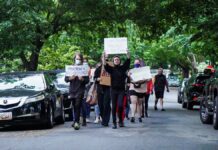