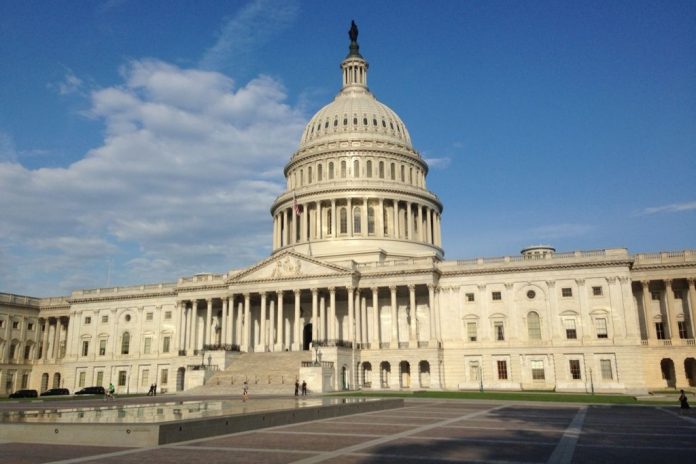 WASHINGTON (AP) — A last-minute deal will keep the U.S. from driving off the so-called “fiscal cliff,” but higher taxes and continued political fighting in Washington threaten to shake the fragile economy well into 2013.

A bill passed by Congress late Tuesday averts widespread tax increases and delays deep spending cuts that had threatened to return the country to recession.

Investors around the world breathed a collective sigh of relief after the biggest near-term stumbling block for the world economy had been cleared.

At midday Wednesday on Wall Street, the Dow Jones industrial average was up a hefty 223 points, or 1.7 percent. Broader stock averages also jumped.

Some economists were disappointed that Congress and the White House couldn’t reach agreement on a broader deal to significantly reduce the deficit over the next 10 years. That could have boosted business and consumer confidence and accelerated growth.

“Nothing really has been fixed,” said Joseph LaVorgna, an economist at Deutsche Bank. “There are much bigger philosophical issues that we aren’t even addressing yet.”

Lawmakers postponed tough decisions on government spending, giving themselves a reprieve from cuts that were scheduled to start taking effect automatically Jan. 1. That just sets the stage for more hard bargaining later. Spending cuts could hurt growth even more.

Another standoff is likely to arrive as early as February, when Congress will need to raise the $16.4 trillion federal borrowing limit so the government can keep paying its bills. House Republicans, who objected strongly to the latest fiscal deal Tuesday before the chamber finally voted to approve it, probably won’t agree to raise the debt limit without offsetting spending cuts that Democrats are sure to resist.

President Barack Obama warned Republicans late Tuesday that “if Congress refuses to give the United States government the ability to pay these bills on time, the consequences for the entire global economy would be catastrophic, far worse than the impact of a fiscal cliff.”

Meanwhile, the economy doesn’t have much growth to give. Mark Vitner, senior economist at Wells Fargo, predicts it will expand just 1.5 percent in 2013, down from a weak 2.2 percent in 2012. Unemployment stands at 7.7 percent.

Ben Schwartz, chief market strategist for Lightspeed Financial, said unemployment was still likely to edge up and retail sales growth was likely to be weaker than last year.

“Regardless of a deal getting done, people on Wall Street are not going to run around giving high fives” in celebration, Schwartz said. “The federal government is obviously dysfunctional, to say the least.”

The months-long political standoff over fiscal policy has already taken its toll, adding uncertainty that has discouraged consumers from spending and businesses from hiring and investing.

The fiscal cliff, with its Jan. 1 deadline to reach a deal over taxes and spending, was created to force Democrats and Republicans to compromise, and it barely succeeded. Without a deal, more than $500 billion in tax increases would hit the economy in 2013 alone, along with $109 billion in cuts from the military and domestic spending programs.

Negotiations to avert catastrophe have highlighted once again how far apart the two parties are on taxes (Republicans don’t want to raise them) and spending (Democrats are reluctant to cut government programs).

Political gridlock has been rattling financial markets and shaking consumer and business confidence the past two years.

After a fight over raising the debt limit last year, the credit rating agency Standard & Poor’s yanked the U.S. government’s blue-chip AAA bond rating because it feared that America’s dysfunctional political system couldn’t deliver a credible plan to reduce the federal government’s debt. S&P warned that “the differences between political parties have proven to be extraordinarily difficult to bridge.”

The Dow dropped 635 points in panicked selling the first day of trading after the S&P announcement.

Outside Washington, the economy has been getting some good news. Europe’s financial crisis appears to have eased. And the U.S. real estate market finally appears to be recovering from the housing bust.

But partisan divide has left businesses and consumers wondering what’s going to happen to their taxes and to federal contracts.

Companies have plenty of cash. But they reduced spending on industrial equipment, computers and software from July to September, the first quarterly drop since mid-2009 when the economy was still in recession. And hiring has been stuck at a modest level of about 150,000 new jobs per month this year.

Consumer confidence fell in December for the second straight month, according to a survey by the Conference Board, which blamed the drop on worries about the fiscal cliff. The uncertainty is also believed to have hurt holiday shopping, which grew at the slowest pace this year since 2008.