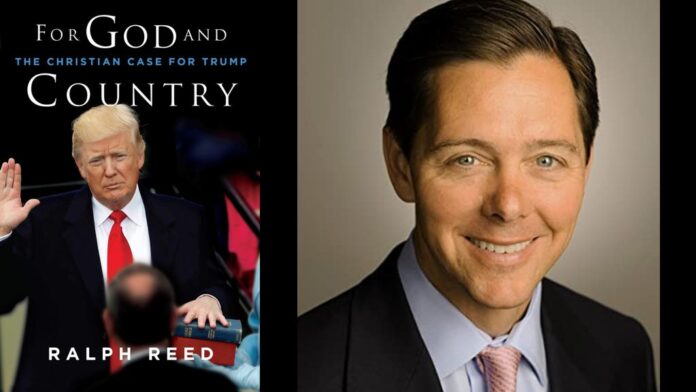 In 2016, many Christian leaders at first opposed candidate Donald Trump. He was a former social liberal, and his occasional vulgarity, multiple marriages and divorces, and tabloid scandals made it impossible for him to defend Christian values in public life. Or so they thought.

Trump nevertheless won four-fifths of the Evangelical vote in 2016, as well as the majority of the Catholic vote. And in 2020, the idea that he can’t represent Christians is demonstrably false. He has been the most ardent and effective presidential defender of religious liberty and the pro-life cause since Ronald Reagan—and perhaps in U.S. history.

In For God and Country, Dr. Ralph Reed draws on his deep knowledge of American history, his unsurpassed experience as a political strategist, his personal dealings with President Trump and the First Family, and his moral commitment as a Christian to show why Catholics and Evangelicals should continue to strongly support their unlikely champion.

In For God and Country, Reed reveals:

“In For God and Country, Ralph Reed dismantles liberal media falsehoods and provides a compelling analysis of why Evangelical Christians back Donald Trump—because his policies reflect their values and he is a champion for their beliefs. If you want to understand why Trump won in 2016 and will do so again in 2020, read this book.” — Mark Levin, host of The Mark Levin Show, host of Life, Liberty, & Levin on Fox News, and bestselling author

“For decades, Evagelicals have wanted to defend their rights and answer their critics. In this terrific book, Ralph Reed shows them how. And he correctly argues they are right to support Donald Trump and his policies.” — Mark Meadows, congressman from North Carolina and former chairman of the House Freedom Caucus

“As Ralph Reed makes clear in his brilliant new book, Christians stand with Trump because he stands for important biblical principles including the right to life and religious liberty. If the Left was surprised by the level of Evangelical support for Trump in 2016, their heads will explode in 2020 when they see even more Evangelicals rally around the most pro-life, pro-religious liberty, and pro-Israel president in history.” — Dr. Robert Jeffress, pastor at First Baptist Church in Dallas, Texas, and author of Courageous: 10 Strategies for Thriving in a Hostile World

“Donald Trump may not have been my first choice for president (I was!), but I joined tens of millions of Evangelicals in supporting him. In this rollicking account, Ralph Reed shows how these God-fearing, patriotic voters made the difference for Trump in 2016—and will likely do so again in 2020.” — Mike Huckabee, former governor of Arkansas, host of Huckabee on the Trinity Broadcasting Network (TBN), and bestselling author

Ralph Reed is founder and chairman of Faith & Freedom Coalition, a pro-family public policy organization with over 2 million members.  He has worked on 11 presidential campaigns and currently serves on the Pro-Life and Evangelicals for Trump committees for President Trump’s reelection campaign.  He chaired the Georgia Republican Party and was a senior advisor to both George W. Bush presidential campaigns.

He was the Executive Director of the Christian Coalition from 1989 to 1997. The Wall Street Journal has called him “perhaps the finest political operative of his generation.”  He is Chairman and CEO of Century Strategies, a public relations firm.

Reed earned a B.A. from the University of Georgia and Ph.D. in history from Emory University.  He and his wife, Jo Anne, have four children and one grandchild and reside in Atlanta, Georgia.