ATLANTA GA – VoterGA announced today it has evidence election result discrepancies in other Georgia counties may be worse than those it presented for Fulton County at a VoterGA press conference Tuesday. The revelation came as VoterGA formalized its call for a truly independent, forensic audit of all county results for the November 3rd, 2020 and January 5th, 2021 elections. VoterGA first announced support for a statewide audit at a July 5th Woodstock Festival and Parade.

On Tuesday, VoterGA explained how a review of newly released public documents led them to amend the Fulton complaint to add counts for these audit discrepancies:

According to VoterGA, a full statewide audit of November, 2020 and January, 2021 election results should validate voter eligibility. It must also include forensic authenticity, security assessments, and accuracy verification involving:

VoterGA further insisted that any such Georgia audit must be conducted by a truly independent team that has no relationship with any Georgia officials who conducted the elections. VoterGA flatly rejected the suggestion by House Speaker David Ralston to engage the Georgia Bureau of Investigation (GBI) stating the GBI:

Another complaint involving the November and January elections, Daugherty v. Raffensperger, is expected to have its first hearing today. [Exhibits] 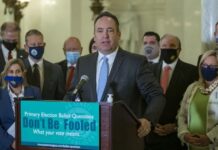