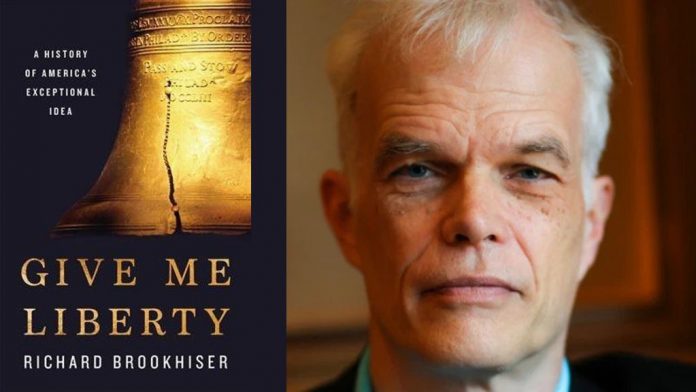 An award-winning historian, Richard Brookhiser, recounts the history of American liberty through the stories of thirteen essential documents in his book Give Me Liberty: A History of America’s Exceptional Idea.

Nationalism is inevitable: It supplies feelings of belonging, identity, and recognition. It binds us to our neighbors and tells us who we are. But increasingly — from the United States to India, from Russia to Burma — nationalism is being invoked for unworthy ends: to disdain minorities or to support despots. As a result, nationalism has become to many a dirty word.

In Give Me Liberty, award-winning historian and biographer Richard Brookhiser offers up a truer and more inspiring story of American nationalism as it has evolved over four hundred years. He examines America’s history through thirteen documents that made the United States a new country in a new world: a free country. We are what we are because of them; we stay true to what we are by staying true to them.

Americans have always sought liberty, asked for it, fought for it; every victory has been the fulfillment of old hopes and promises. This is our nationalism, and we should be proud of it.

“Smart…As historian, Mr. Brookhiser understands the varied standards and qualities of the American experience and interprets its growth with skill and understanding. And as journalist, he performs a key service: joining the ideals and episodes together, defining the theme that makes the United States exceptional.”―Wall Street Journal

“Subtle, economic, and gripping…[An] original reflection on the nature of our American experiment, the work of a man who has for many years immersed himself in the minds of those who forged our freedom.”―Michael Knox Beran, National Review

“Brookhiser grounds his spirited argument for American exceptionalism in the idea of liberty…An engaging history of admirable episodes from America’s past.”―Kirkus

“An elegant and lyrical case for the ideal that has shaped America.”―Mona Charen

“A collection of profiles that should ignite the spark of national pride and patriotism. Give Me Liberty is an exceptional study of America’s ‘exceptional idea.'”―Roanoke Times

“In our deeply divided America, Richard Brookhiser goes back in search of our roots, and finds them in that many-headed idea called ‘liberty.’ In his signature style, he wastes no words, defies the conventional political categories, and invites us to join him in recovering a series of inspirational moments when we all felt the same future in our hearts and minds.”―Joseph J. Ellis, author of American Dialogue: The Founders and Us

“With his characteristic combination of elegance and shrewdness, Richard Brookhiser gives us another insightful account of what makes us the nation we are. Give Me Liberty is intellectual history at its riveting best.”―H.W. Brands, author of Heirs of the Founders and Dreams of El Dorado

Richard Brookhiser is a senior editor of National Review and the author of thirteen books, including John Marshall: The Man Who Made the Supreme Court, Founders’ Son: A Life of Abraham Lincoln, and James Madison. He lives in New York City.