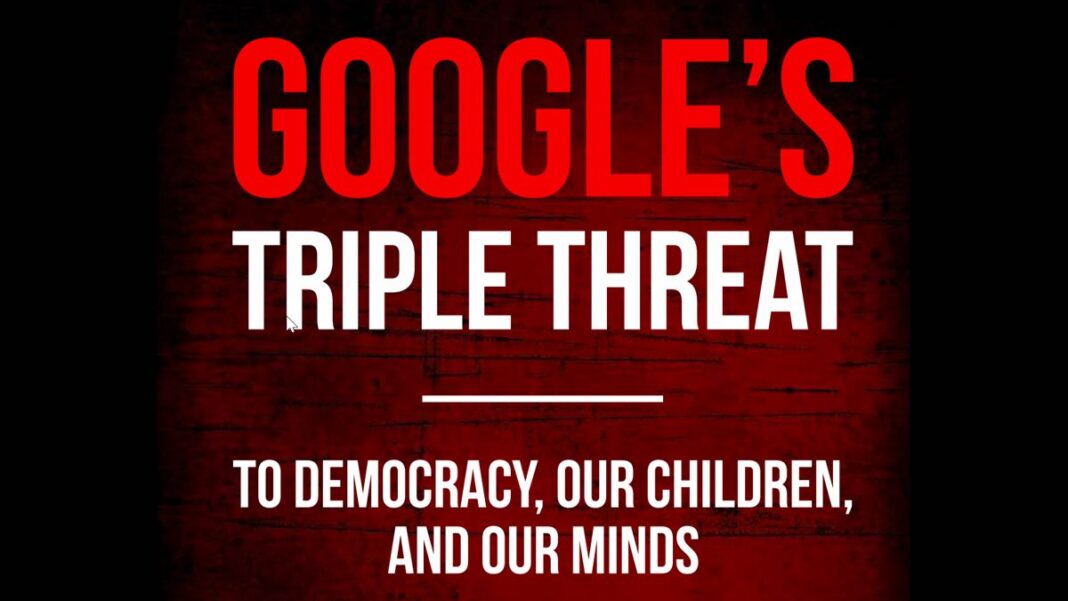 Google’s Triple Threat: To Democracy, Our Children, And Our Minds is an expanded version of Dr. Robert Epstein’s Congressional Testimony given on July 16, 2019 and updated on May 14, 2022. Robert Epstein, Ph.D. is the Senior Research Psychologist at the American Institute for Behavioral Research and Technology.

Table of Contents
A Personal Introduction, 3
Disturbing Scientific Discoveries, 6
But What About the Russians? 11
Google Is the Biggest Threat, 12
The Surveillance Business Model, 15
And It’s Not Just Google, 16
A Brief Note About a Critically Important
Demographic: Our Children, 17
Monitoring Systems: The Key to Keeping Big
Tech Out of Our Elections, 18
A Simple Way of Quickly Ending Google’s
Worldwide Monopoly on Search, 21
President Eisenhower’s Warning, 22
References, 23
Appendix I: Links of Possible Interest, 33
Appendix II: The Methodology of SEME
Experiments, 34
Appendix III: Dr. Epstein’s Article in Bloomberg
Businessweek, “To Break Google’s Monopoly on
Search, Make Its Index Public,” 37

I am not a conservative, and I am not writing this essay to advance a political agenda. If anything, I lean left politically, so I should be applauding Google and the other Big Tech companies for their recent support of liberal candidates and causes.

But I can’t applaud, because rigorous research I have been conducting since 2013 has shown me how dangerous these companies are – Google-and-the-Gang, I call them. The rise of the internet has given these companies unprecedented power to control public policy, to swing elections, to brainwash our children, to censor content, to track our every move, to tear societies apart, to alter the human mind, and even to reengineer humanity.

That last idea comes from an 8-minute video (https://is.gd/44KCDm) that leaked from Google in 2018. To Google executives, “resequencing human behavior” in a way that “reflects Google’s values” (https://is.gd/VUC5nl) is a great idea. My research shows they have the power to do it, and former Google employees such as Tristan Harris and Zach Vorhies have confirmed in recent years that Google is indeed using the powerful new tools of influence I study to influence people on a massive scale

As Ruth Porat, Chief Financial Officer of Google, put it at an all-hands meeting of Google employees held three days after Trump won the 2016 election, “Our values are strong. We will fight to protect them, and we will use the great strength and resources and reach we have to continue to advance really important values.”

I am helping to expose these companies because I love America and democracy and freedom, and because these companies are now undermining all three of these sacred institutions in ways very few people understand – even our leaders, the people who have sworn to protect our country from harm.

Even if our leaders did understand the real threats the Big Tech monopolies pose, I doubt that they would intervene. Many of them depend on tech money for their campaigns (Alphabet, Google’s parent company, was Hillary Clinton’s largest donor in 2016), and they all live in constant fear that these companies will suddenly erase them. Remember when Facebook and Twitter shut down President Trump’s accounts in early 2021? In a split second, they severed the two main links Trump had to his tens of millions of supporters.

I am not one of those supporters, but do we really want executives at private companies deciding whether our nation’s leaders can or cannot communicate with the public?

When our leaders do hold hearings and rattle their swords about Google-and-theGang, it’s mainly for show. Right now both houses of Congress and many state attorneys general are threatening to “break up” Google and Facebook through antitrust actions. This is complete nonsense, and our leaders know it. Even if the government forced Google or Facebook to sell off some of the companies they have bought over the years (Google buys a new company roughly every week), that would do little to curtail the obscene power these companies have. Why? Because you can’t break up Google’s search engine (it needs to be whole to provide good results), and you can’t break up Facebook’s social media platform (doing so would split up tens of millions of families and hundreds of millions of friend connections).

Those platforms are the main tools Google and Facebook use for surveillance, censorship, and manipulation. Google and Facebook executives know this, and they know those platforms can’t be touched by our government. That is why their lawyers have worked closely with government officials to craft the antitrust actions that are currently in progress. This is a classic case of “regulatory capture” – an old tradition in corporate America. The kinds of breakups that might eventually occur will actually help Google-and-the-Gang – consolidating their power and enriching them beyond measure, all while creating the false impression that they have now been tamed by our government.

As the father of five children, I am especially concerned about what humanity’s future will look like if Big Tech is allowed to continue unobstructed on its path toward world domination. In the 1950s, British economist Kenneth Boulding wrote, “A world of unseen dictatorship is conceivable, still using the forms of democratic government.” I am writing this essay because I believe that such a world already exists, and that unless we act quickly and decisively, the power that the technology company executives have garnered will become so firmly entrenched that we will never be able to unseat them from their invisible thrones.

I have been a research psychologist for nearly 40 years and have also served in various editorial positions at Psychology Today magazine and Scientific American. I received my Ph.D. at Harvard University in 1981 and have since published 15 books and more than 300 scientific and mainstream articles on artificial intelligence and other topics. Since 2012, some of my research and writings have focused on Google LLC, specifically on the company’s power to suppress content, on the massive surveillance the company conducts, and on the company’s unprecedented ability to manipulate the thoughts and behavior of more than 3 billion people worldwide.

Data I have collected since 2016 show that Google displays content to the American public that is biased in favor on one political party (Epstein et al., 2021) (https://is.gd/RTicxm). It is a party I happen to like, but that is irrelevant. No private company should have either the right or the power to manipulate large populations without their knowledge.

I have published articles about my research on Google in both scientific publications and a wide array of mainstream news sources: in TIME magazine, U.S. News & World Report, USA Today, Politico, Dissent, The Hill, and Huffington Post, for example, but also in The Daily Caller, The Epoch Times, and even in Russia’s Sputnik News

I reach out to diverse audiences because the threats posed by Google, and, to a lesser extent, Facebook, are so serious that I think everyone in the world needs to know about them. I put my own political leanings aside when I report my data and concerns because the problems these companies present eclipse personal politics. To put this another way, I love humanity, my country, and democracy more than I love any particular party or candidate.

GOOGLE’S TRIPLE THREAT: To Democracy, Our Children, and Our Minds PDF