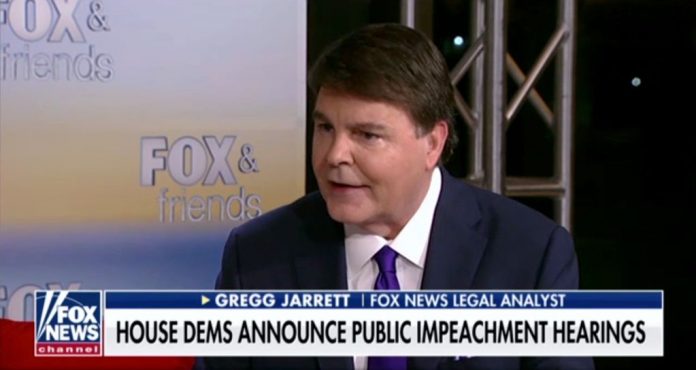 Is the president in trouble? We learned that the attorney Mark Zaid had set this all up. It was contrived it was preordained to overturn the election and Gregg Jarrett says opinion and gossip of diplomats does not lead to high crimes and misdemeanors. Text from attorney Mark Zaid

According to Greg Jarrett “We learned that the attorney Mark Zaid had set this all up. It was contrived it was preordained. The attorney for the whistleblower, is not a whistleblower under the law, actually came upon a recommendation of Adam Schiff’s committee, so that speaks volumes that this is a partisan witch hunt . . . And all of the witnesses who will be called have already testified secretly, they’re are all opinion witnesses offering their interpretations of a conversations they weren’t privy too. They’re all diplomats, and diplomats are notorious gossipers. And so, for example, Steve mentioned Bill Taylor is one of the first witnesses. Taylor said ‘Oh it was my understanding there was a quid pro quo’. ‘Did you get that from the President?’ ‘No, a guy told a guy who told me.’ If that were in a court of law a judge would say to the jurors, ‘disregard the testimony, strike it from the record, its irrelevant’.