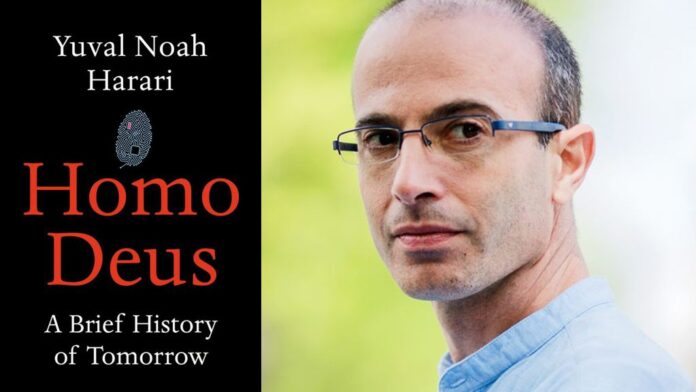 Yuval Noah Harari, author of the critically acclaimed New York Times best seller and international phenomenon Sapiens, returns with an equally original, compelling, and provocative book, turning his focus toward humanity’s future and our quest to upgrade humans into gods.

Over the past century, humankind has managed to do the impossible and rein in famine, plague, and war. This may seem hard to accept, but as Harari explains in his trademark style – thorough yet riveting – famine, plague, and war have been transformed from incomprehensible and uncontrollable forces of nature into manageable challenges. For the first time ever, more people die from eating too much than from eating too little; more people die from old age than from infectious diseases; and more people commit suicide than are killed by soldiers, terrorists, and criminals put together. The average American is 1,000 times more likely to die from binging at McDonalds than from being blown up by Al Qaeda.

What then will replace famine, plague, and war at the top of the human agenda? As the self-made gods of planet Earth, what destinies will we set ourselves, and which quests will we undertake? Homo Deus explores the projects, dreams, and nightmares that will shape the 21st century – from overcoming death to creating artificial life. It asks the fundamental questions: Where do we go from here? And how will we protect this fragile world from our own destructive powers? This is the next stage of evolution. This is Homo Deus.

With the same insight and clarity that made Sapiens an international hit and a New York Times best seller, Harari maps out our future.

“Sapiens takes readers on a sweeping tour of the history of our species…. Harari’s formidable intellect sheds light on the biggest breakthroughs in the human story…important reading for serious-minded, self-reflective sapiens.” — Washington Post

“[A] great book…not only alters the way you see the world after you’ve read it, it also casts the past in a different light. In Homo Deus, Yuval Noah Harari shows us where mankind is headed in an absolutely clear-sighted & accessible manner.” — Mail on Sunday

“I enjoyed reading about these topics not from another futurist but from a historian, contextualizing our current ways of thinking amid humanity’s long march–especially…with Harari’s ability to capsulize big ideas memorably and mingle them with a light, dry humor…Harari offers not just history lessons but a meta-history lesson.” — Washington Post

“Spellbinding… This is a very intelligent book, full of sharp insights and mordant wit… It is a quirky and cool book, with a sliver of ice at its heart… It is hard to imagine anyone could read this book without getting an occasional, vertiginous thrill.” — Guardian

“What elevates Harari above many chroniclers of our age is his exceptional clarity and focus.” — London Sunday Times

“Harari is an intellectual magpie who has plucked theories and data from many disciplines – including philosophy, theology, computer science and biology – to produce a brilliantly original, thought-provoking and important study of where mankind is heading.” — Evening Standard (London)

“Homo Deus will shock you. It will entertain you. Above all, it will make you think in ways you had not thought before.” — Daniel Kahneman, author of Thinking Fast, and Slow

“Like all great epics, Sapiens demanded a sequel. Homo Deus, in which that likely apocalyptic future is imagined in spooling detail, is that book. It is a highly seductive scenario planner for the numerous ways in which we might overreach ourselves.” — The Observer (London)

Yuval Noah Harari, author of the critically acclaimed New York Times bestseller and international phenomenon Sapiens, returns with an equally original, compelling, and provocative book, turning his focus toward humanity’s future and our quest to upgrade humans into gods.

Over the past century, humankind has managed to do the impossible: turn the uncontrollable forces of nature—namely famine, plague, and war—into manageable challenges. Today more people die from eating too much than from eating too little; more people die from old age than from infectious diseases; and more people commit suicide than are killed by soldiers, terrorists, and criminals combined. We are the only species in earth’s long history that has single-handedly changed the entire planet, and we no longer expect any higher being to mold our destinies for us.

What then will replace famine, plague, and war at the top of the human agenda? What destinies will we set for ourselves, and which quests will we undertake? Homo Deus explores the projects, dreams, and nightmares that will shape the twenty-first century, from overcoming death to creating artificial life. But the pursuit of these very goals may ultimately render most human beings superfluous. So where do we go from here? And how can we protect this fragile world from our own destructive powers? We cannot stop the march of history, but we can influence its direction.

Future-casting typically assumes that tomorrow, at its heart, will look much like today: we will possess amazing new technologies, but old humanist values like liberty and equality will guide us. Homo Deus dismantles these assumptions and opens our eyes to a vast range of alternative possibilities, with provocative arguments on every page, among them:

Prof. Yuval Noah Harari is a historian, philosopher, and the bestselling author of Sapiens: A Brief History of Humankind, Homo Deus: A Brief History of Tomorrow, 21 Lessons for the 21st Century, and Sapiens: A Graphic History. His books have sold 27.5 Million copies in 60 languages, and he is considered one of the world’s most influential public intellectuals today. The Guardian has credited Sapiens with revolutionizing the non-fiction market and popularizing “brainy books”.

In 2020 Harari joined forces with renowned comics artists David Vandermeulen and Daniel Casanave, to create Sapiens: A Graphic History: a radical adaptation of the original Sapiens into a graphic novel series that is bursting with wit, humour and colour (to be launched fall 2020). This illustrated book casts Yuval Noah Harari in the role of guide, who takes the reader through the entire history of the human species, accompanied by a range of fictional characters and traveling through time, space and popular culture references.

Born in Haifa, Israel, in 1976, Harari received his PhD from the University of Oxford in 2002, and is currently a lecturer at the Department of History, the Hebrew University of Jerusalem. He originally specialized in world history, medieval history and military history, and his current research focuses on macro-historical questions such as: What is the relationship between history and biology? What is the essential difference between Homo sapiens and other animals? Is there justice in history? Does history have a direction? Did people become happier as history unfolded? What ethical questions do science and technology raise in the 21st century?