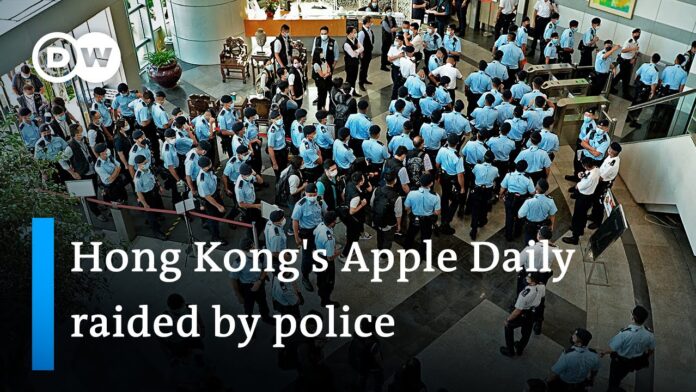 International rights groups on Thursday slammed Hong Kong authorities after local police mobilized over 500 officers in a raid on the headquarters of local newspaper Apple Daily.

The raid resulted in the arrest of five directors of the newspaper under the Beijing’s draconian national security law. They were accused of violating Article 29 of the law, which bans “collusion with a foreign country or with external elements to endanger national security.“ The collusion charge carries a maximum penalty of life imprisonment.

Among those arrested were the paper’s editor-in-chief Ryan Law and associate publisher Chan Pui-man. Cheung Kim-hung and Royston Chow, chief executive officer and chief operating officer of the paper’s publishing firm Next Digital, were also arrested.

It marks the second raid at the paper’s headquarters in less than a year, after 200 Hong Kong police officers stormed the newsroom in August last year a month after the national security law went into effect.

“The arrests of five executives at the pro-democracy Apple Daily today under Hong Kong’s Orwellian National Security Law destroy any remaining fiction that Hong Kong supports freedom of the press,” Steven Butler, Asia program coordinator of the Committee to Protect Journalists (CPJ), said in a statement.

He added: “China, which controls Hong Kong, may be able to eliminate the paper, which it sees as an annoying critic, but only at a steep price to be paid by the people of Hong Kong, who had enjoyed decades of free access to information.”