Two bills will be introduced to counter critical race theory at the federal level, Rep. Dan Bishop (R-N.C.) announced with some GOP House members at a press conference in front of the Capitol on Wednesday.

One bill is Combat Racist Training in the Military Act, a House companion bill to the bill introduced by Senator Tom Cotton (R-Ark.) in the Senate. The bill prohibits the United States military from promoting critical race theory.

The second bill is called Stop Critical Race Theory Act. Bishop called it “the most comprehensive legislation” to restrict the spread of the quasi-Marxist ideology.

Both bills will have 31 co-sponsors when introduced, Bishop said.

“Critical Race Theory is a divisive ideology that threatens to poison the American psyche,” Bishop said during the conference. “The roots of this ideology are unmistakable. Just as Karl Marx advocated a social critical ethic of societal classism—oppressor versus oppressed—this is Neo Marxist ideology, Cultural Marxism masquerading as history and designed to mislead.”

Critical race theory redefines America’s history as a struggle between “oppressors” (white people) and the “oppressed” (everybody else), as was done with Marxism’s reduction of human history to a struggle between the “bourgeoisie” and the “proletariat.” It labels institutions that emerged in majority-white societies as “systemically” or “structurally” racist.

“Cancel culture is one of its weapons; mob-like attacks on free expression, intimidation. For the sake of our children’s future, we must stop this effort to cancel the truth of our founding,” Bishop continued.

Former Director of the Office of Management and Budget (OMB) Russ Vought gave three examples of how critical race theory impacts the country at the press conference. 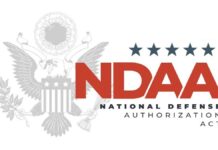 Why The Defense Bill Deserves Defeat