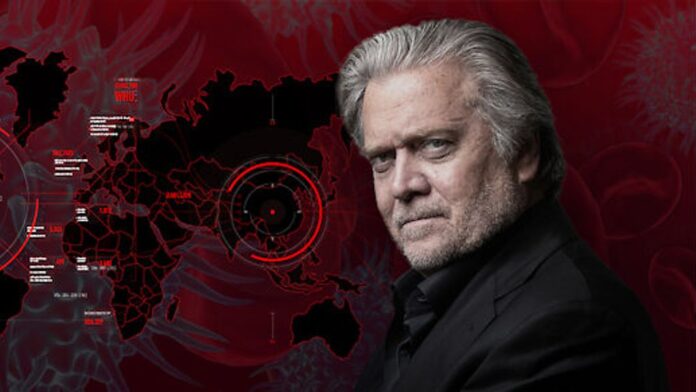 The House of Representatives voted Thursday to hold former President Donald Trump adviser Steve Bannon in contempt of Congress after he declined to cooperate with a congressional investigation of the Jan. 6 “Stop the Steal” rally.

The partisan vote came after the Democrat-led Jan. 6 Committee voted to move the charge forward to be confirmed in the House. Members of the commission alleged that Bannon refusing a subpoena to provide documents and testimony to the panel constitutes contempt of Congress.

The contempt resolution argues that Bannon has no legal standing to defy the subpoena.

“The January 6th Committee is a partisan sham to distract Americans from the Democrats’ policies that are killing and robbing Americans,” the memo alleged.

The committee says it wants Bannon’s documents and testimony because he was in touch with Trump before the Jan. 6 incident, because he tried to get Trump to focus on the congressional certification of the election results, and because he said on Jan. 5 that “all hell is going to break loose” the next day.

Bannon “appears to have had multiple roles relevant to this investigation, including his role in constructing and participating in the ‘stop the steal’ public relations effort that motivated the attack” and “his efforts to plan political and other activity in advance of Jan. 6,” the committee alleged in the resolution.

With the House’s certification of the charge, it is now up to the Department of Justice (DOJ) to decide whether or not to pursue legal action.

President Joe Biden has encouraged the DOJ, led by his appointee Merrick Garland, to prosecute those found to have violated the Jan. 6 commission’s subpoenas.

White House press secretary Jen Psaki later sought to clarify Biden’s remarks, writing on Twitter that he “supports the work of the committee and the independent role of the Department of Justice to make any decisions about prosecutions.”

Rep. Marjorie Taylor Greene reports on a busy day in the House of Representatives, including the vote to hold “War Room” host Steve Bannon in contempt for refusing to cooperate with the select Jan. 6 Witch Hunt Committee.

“I sat on the House floor when they were debating the House resolution to hold an innocent American in contempt, which is you Steve, and Republican Liz Cheney and Adam Kinzinger, the two chosen Republicans that Nancy Pelosi put on the Witch Hunt Committee that’s nothing but a sham. You know they kicked off Jim Jordan and Jim Banks. They wouldn’t allow them to participate. Liz Cheney was the one in charge of the Republican side of the debate. She only yielded her time to Democrats; she never yielded her time to Republicans, and they only gave us 20 minutes. … So then the vote took place and here they are celebrating voiting to hold an innocent man in contempt because you didn’t go answer the subpoena and show up to their fake committee that isn’t even constitutional because they aren’t allowing … our Republican comrades to participate.”

Today, President Donald J. Trump filed a lawsuit in defense of the Constitution, the Office of the President, and the future of our nation, all of which the sham Unselect Committee is trying to destroy. The fact is America is under assault by Pelosi’s Communist-style attempt to silence and destroy America First patriots through this hyper-partisan and illegitimate investigation.

●      The January 6th Committee is a partisan sham to distract Americans from the Democrats’ policies that are killing and robbing Americans. For example:

o   The Border crisis is flooding our communities with drugs and gangs, while costing taxpayers billions.

o   The Democrats’ mismanagement of COVID exposed America’s elderly to a deadly disease and then in many cases, forced them to die alone.

o   By defunding the police and embracing criminals, Democrats have made our cities less safe.

o   The unconstitutional mandates are destroying the economy.

●      The media is complicit in advancing the Committee’s unconstitutionally flawed request.

●      This committee exposed itself as a sham by requesting documents which serve no legitimate legislative purpose—what does President Trump’s campaign polling data from Florida have to do with an investigation into January 6th?