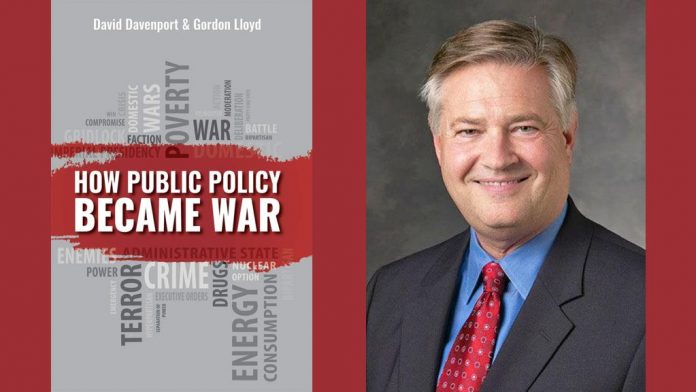 President Franklin Roosevelt’s New Deal is widely understood as a turning point in American history. Roosevelt’s decisions of 1933 reset the balance of power away from Congress and the states toward a strong executive branch. They shifted the federal government away from the Founders’ vision of deliberation and moderation toward war and action. Modern-day presidents have declared war on everything from poverty and drugs to crime and terror. Exploring the consequences of these ill-defined (and never-ending) wars, How Public Policy Became War calls for a re-examination of this destructive approach to governance.

David Davenport is a research fellow specializing in international law and treaties, constitutional federalism, and American politics and law. From 1985 to 2000 he was the president of Pepperdine University. Gordon Lloyd is a senior fellow at the Ashbrook Center, and the Dockson Professor Emeritus of Public Policy at Pepperdine University. He serves on the National Advisory Council for the Walter and Lenore Annenberg Presidential Learning Center through the Ronald Reagan Presidential Foundation.