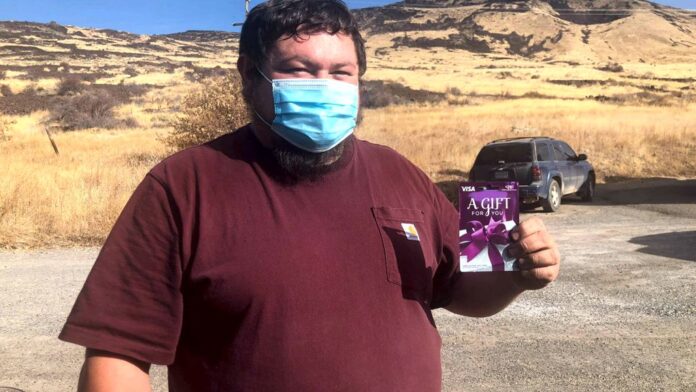 The Nevada Native Vote Project posted photos on Facebook on Election Day of smiling voters holding $25 gift cards after handing over their ballots.

The posts have since been deleted but not before they were archived. The removal may have had something to do with the U.S. criminal code, two distinct sections of which impose fines and prison sentences for “whoever makes or offers to make an expenditure to any person, either to vote or withhold his vote.”

Offering gift cards for ballots was not the only way the Nevada Native Vote Project enticed people to vote. In a video that still appeared on Facebook on Nov. 24, Bethany Sam, the public relations officer for the Reno-Sparks Indian Colony, urged people to come out and vote by offering “some extra swag that we can give out.”

“We have twenty-five $25 dollar gift cards to raffle off so that’s a lot of money in cash here. We have also four $100 gift cards to give away, so again you want to make sure to get out here and vote. And then, we have four $250 gift cards to raffle. And our grand prize is going to be a $500 Visa gift card to the person or native voters who came out early this week early voting,” Sam said, adding that voters need only send a photo of themselves at the polling place to enter.

Sam stood beside two elderly people who were holding free T-shirts they received for coming out to vote. She added that more shirts were still available, in addition to keychains, bracelets, necklaces, earrings, and stickers.

Nevada was not the only state offering a chance to win cash and expensive prizes on or before Election Day. The Epoch Times has reviewed photos and videos documenting the same scheme in eight other states, including the perennial battlegrounds of Arizona, Wisconsin, and Minnesota.