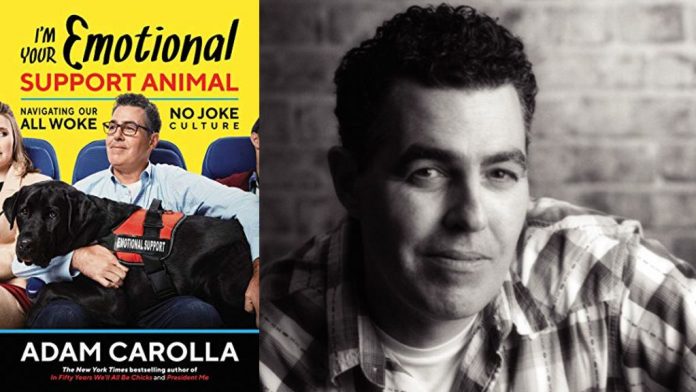 Three-time New York Times bestseller Adam Carolla is back to take on social media, social justice warriors, and a society gone to s**t.

“As the revolution reaches its final, most humorless stage, there’s no better, braver, or more insightful observer than Adam Carolla. You may feel despondent about what’s happening right now. This book will remind you that you should also be amused.” —Tucker Carlson

In I’m Your Emotional Support Animal, Adam Carolla examines how our culture went careening off a cliff. We used to have one that created real warriors who fought world wars. Now it spawns social justice warriors who fight Twitter wars. He takes on those who are traumatized by Trump and “emotional support animal” owners who proclaim their victimhood at every airport. He stands up for the collateral damage of the #MeToo movement and for freedom of speech on “safe space” filled college campuses. Examining the calculated commercials churned out by Madison Avenue, like the ones about cars “made with love,” Carolla rants on ads designed to either bum us out or make us think the corporation is run by Mr. Rogers. Turning to social media, Adam takes down the “hashtag heroes” who signal their virtue daily from atop Twitter mountain. And in the era of the Roomba, performances by dead celebrity holograms, and meals-on-demand delivery services, he looks down the road at our not-so-bright future as a species.

“Adam and I agree on absolutely nothing but he’s a sharp, smart, funny guy to disagree with. And there’s a human heart under all the gruffness, snark, and melted cheese.” —Patton Oswalt

Frank, funny, and utterly unapologetic, this is not a book for those who need a trigger warning, but is THE book for everyone who wants to hit the snooze bar on the “woke” culture.

“Adam has written a funny, insightful book with a powerful message a bunch of people will manage to be offended by without reading it.” —Tim Allen

“Adam has done it again! In this book he’s managed to make me laugh at one moment, then cry out “What an idiot!” in the next. His own blue-collar mastery of the language invites the reader into the conversation—just like the podcast—so much so that I breezed through the book in only one sitting on the toilet.” —Bryan Cranston

Adam Carolla is the author of the New York Times bestsellers In Fifty Years We’ll All Be Chicks, Not Taco Bell Material, President Me, and Daddy Stop Talking, as well as a radio and television host, comedian, and actor. Carolla is well known as the cohost of the syndicated radio and MTV show Loveline, the cocreator and star of The Man Show and Crank Yankers, and a contestant on Dancing with the Stars and Celebrity Apprentice. He currently hosts The Adam Carolla Show, which is the Guinness World Record holder for Most Downloaded Podcast and is available on iTunes and AdamCarolla.com.