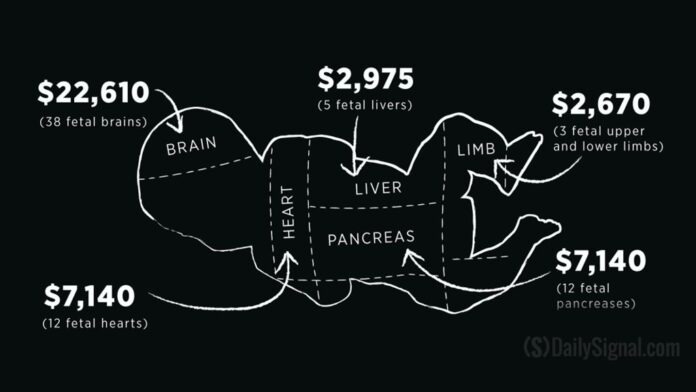 Republicans on the special House panel investigating the transfer of fetal tissue from aborted babies will present evidence in a hearing today that breaks down the price per body part.

With release of this evidence, Republicans say, they have enough documentation to show that several abortion clinics and middleman procurement businesses may have violated federal law.

“It is just horrifying,” Rep. Marsha Blackburn, R-Tenn., who leads the House’s investigation of the fetal tissue industry, told The Daily Signal. “They are putting a dollar value on these organs from these children—unborn children that have been aborted. It is just beyond belief.”

Middleman procurement businesses are companies that obtain tissue and other body parts from aborted babies and provide them to institutions or other organizations for research. Under federal law, the transportation of fetal tissue is based on a nonprofit model.

The committee’s documents, which will be used today in a House hearing on the pricing of fetal tissue, include payments made from a middleman procurement company to an abortion clinic on a monthly basis. Those dollar amounts range from $6,010 to $11,365.

Over the span of a year, one research institution paid a middleman company $42,535 to obtain 38 fetal brains, 12 fetal hearts, three fetal upper/lower limbs, five fetal livers, and 12 fetal pancreases, according to the select House panel’s documents.

The Select Investigative Panel on Infant Lives, as it is formally known, was created on Oct. 7, 2015, when the House passed a resolution calling for a full and complete investigation regarding the medical practices of abortion service providers and the business practices of the procurement organizations that sell fetal tissue.