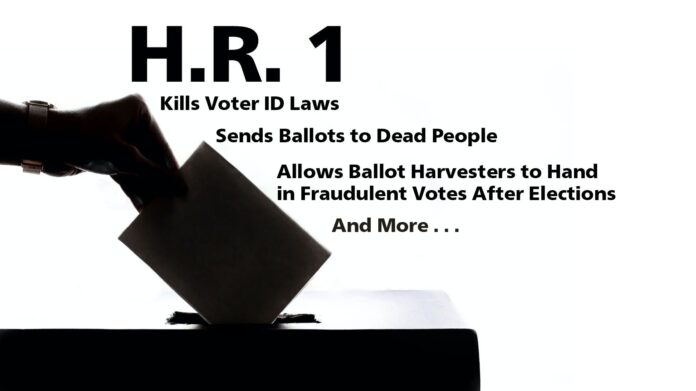 “[H.R. 1]  basically codifies everything that was irregular or outright wrong or the opportunities for fraud during last year’s election and makes it the law of the land,” Rokita said in an interview on SiriusXM’s Breitbart News Daily with host Alex Marlow. “It takes out the balance between integrity and accountability and access to polling places.”

Rokita explained, “H.R. 1 makes photo ID illegal in the United States. Meanwhile, it mails out live ballots to everyone on the voting list — alive or dead — and it makes it much more difficult for states to take dead people off the voting rolls, to take people who moved away off of voting rolls.”

Rokita noted that H.R. 1, named the For the People Act, would also nationalize legalize ballot harvesting and extend voting deadlines for ten days after an election.

“[H.R. 1] says you can still turn in that mailed-out ballot — or your ballot harvester can, the third party that’s going around collecting them — up to ten days after the election. So if you get a close election, you can still have harvesters out there collecting — possibly, likely — fraudulent ballots and turning them in because you really don’t have to do anything, and you have to accept these ballots.”

Marlow assessed, “There’s no sane Western country that does this, is there?”