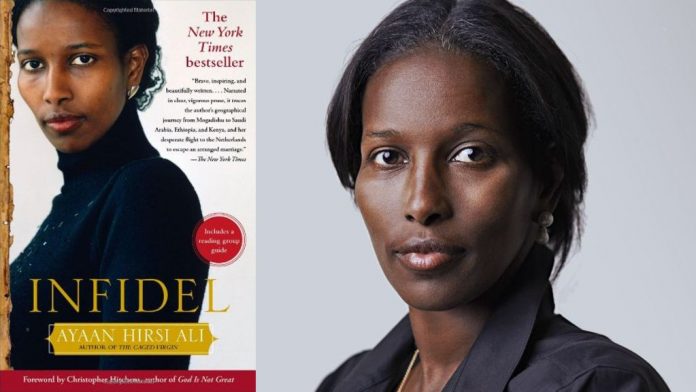 One of today’s most admired and controversial political figures, Ayaan Hirsi Ali burst into international headlines following the murder of Theo van Gogh by an Islamist who threatened that she would be next. She made headlines again when she was stripped of her citizenship and resigned from the Dutch Parliament.

Infidel shows the coming of age of this distinguished political superstar and champion of free speech as well as the development of her beliefs, iron will, and extraordinary determination to fight injustice. Raised in a strict Muslim family, Hirsi Ali survived civil war, female mutilation, brutal beatings, adolescence as a devout believer during the rise of the Muslim Brotherhood, and life in four troubled, unstable countries ruled largely by despots. She escaped from a forced marriage and sought asylum in the Netherlands, where she earned a college degree in political science, tried to help her tragically depressed sister adjust to the West, and fought for the rights of Muslim women and the reform of Islam as a member of Parliament. Under constant threat, demonized by reactionary Islamists and politicians, disowned by her father, and expelled from family and clan, she refuses to be silenced.

Ultimately a celebration of triumph over adversity, Hirsi Ali’s story tells how a bright little girl evolves out of dutiful obedience to become an outspoken, pioneering freedom fighter. As Western governments struggle to balance democratic ideals with religious pressures, no other book could be more timely or more significant.

“A brave and elegant figure…an honest woman…No one who reads her [memoirs] will doubt the self-questioning and the rigorous honesty of her mind. Perhaps, as in Voltaire’s short story ‘L’IngÉnu,’ it is that too much honesty is sometimes unpalatable, even if it is couched in civil terms…She has an open mind that has released itself from the old straitjacketed frame of reference of Right and Left, she is instinctively, deeply antiauthoritarian and she is unlikely to stick to straight ideological lines. She will go on asking difficult questions.”
— Isabella Thomas, The Observer

“Ayaan Hirsi Ali is one of Europe’s most controversial political figures and a target for terrorists. A notably enigmatic personality whose fierce criticisms of Islam have made her a darling of…conservatives…and…popular with leftists…Soft-spoken but passionate.”
— The Boston Globe

“Too potent a social critic to be tolerated any longer [in her home country]…an unflinching advocate of women’s rights and an unflinching critic of Islamic extremism.”
— The New York Times

“A charismatic figure…of arresting and hypnotizing beauty…[who writes] with quite astonishing humor and restraint.”
— Christopher Hitchens

Ayaan Hirsi Ali was born in Mogadishu, Somalia, was raised Muslim, and spent her childhood and young adulthood in Africa and Saudi Arabia. In 1992, Hirsi Ali came to the Netherlands as a refugee. She earned her college degree in political science and worked for the Dutch Labor party. She denounced Islam after the September 11 terrorist attacks and now serves as a Dutch parliamentarian, fighting for the rights of Muslim women in Europe, the enlightenment of Islam, and security in the West.