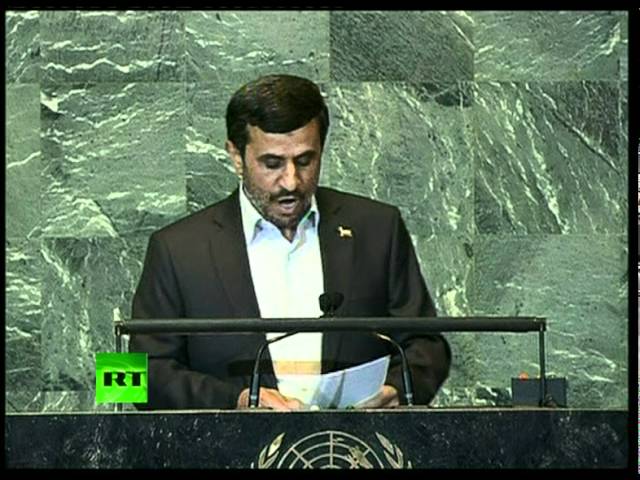 At the United Nations, Iran’s President Ahmadinejad is now at the podium addressing the general assembly. NEW WORLD ORDER SPEECH

Iranian President Mahmoud Ahmadinejad addressed United Nations General Assembly on Wednesday with fierce rhetoric, in his final speech at the gathering as head of state.

He slammed the United States on its foreign policy, though its intended target was absent: A spokesman for the U.S. mission to the U.N. said the U.S. was boycotting the speech, as it usually does, because of Ahmadinejad’s comments in recent days and because the speech was taking place on the Jewish high holy day of Yom Kippur.

Mr Ahmadinejad, whose country faces growing pressure over its nuclear programme, is one of the most high-profile speakers at the UN summit on Wednesday. He has made a series of comments attacking Israel and the West while in New York.

“Over the past couple of days, we’ve seen Mr Ahmadinejad once again use his trip to the UN not to address the legitimate aspirations of the Iranian people but to instead spout paranoid theories and repulsive slurs against Israel,” said Erin Pelton, spokeswoman of the US mission to the United Nations.

“It’s particularly unfortunate that M. Ahmadinejad will have the platform of the UN General Assembly on Yom Kippur, which is why the United States has decided not to attend,” Pelton added.

A British diplomatic source said that the UK would send only a “low level” presence to watch Mr Ahmadinejad’s speech and that the officials had been instructed to walk out if the Iranian President said anything offensive.

The Prime Minister David Cameron and Foreign Secretary William Hague, who are both in New York, will also not be present for Mr Ahmadinejad’s speech.

The source said that while it Mr Cameron and Mr Hague are not scheduled to watch many speeches, they would certainly not attend Mr Ahmadinejad’s. Instead a handful of officials will attend.

The UK is particularly aware of the possibilty of Mr. Ahmadinejad making anti-Semitic comments with today being Yom Kippur.

The United States, Israel and other western nations have regularly staged protest walkouts during Ahmadinejad’s previous speeches at the United Nations.

This will be Mr Ahmadinejad’s last appearance at the UN General Assembly as he is scheduled to stand down next year at the end of his second term as president.