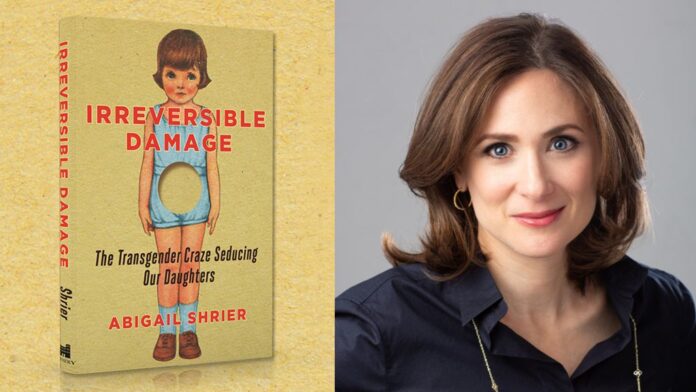 “Irreversible Damage . . . has caused a storm. Abigail Shrier, a Wall Street Journal writer, does something simple yet devastating: she rigorously lays out the facts.” —Janice Turner, The Times of London

Until just a few years ago, gender dysphoria—severe discomfort in one’s biological sex—was vanishingly rare. It was typically found in less than .01 percent of the population, emerged in early childhood, and afflicted males almost exclusively.

But today whole groups of female friends in colleges, high schools, and even middle schools across the country are coming out as “transgender.” These are girls who had never experienced any discomfort in their biological sex until they heard a coming-out story from a speaker at a school assembly or discovered the internet community of trans “influencers.”

Unsuspecting parents are awakening to find their daughters in thrall to hip trans YouTube stars and “gender-affirming” educators and therapists who push life-changing interventions on young girls—including medically unnecessary double mastectomies and puberty blockers that can cause permanent infertility.

Abigail Shrier, a writer for the Wall Street Journal, has dug deep into the trans epidemic, talking to the girls, their agonized parents, and the counselors and doctors who enable gender transitions, as well as to “detransitioners”—young women who bitterly regret what they have done to themselves.

Coming out as transgender immediately boosts these girls’ social status, Shrier finds, but once they take the first steps of transition, it is not easy to walk back. She offers urgently needed advice about how parents can protect their daughters.

A generation of girls is at risk. Abigail Shrier’s essential book will help you understand what the trans craze is and how you can inoculate your child against it—or how to retrieve her from this dangerous path.

“Courage is a rare trait. Abigail Shrier has it in abundance. She defies the politically correct tide to write a moving and critically needed book about a terrible new plague that endangers our children—‘rapid-onset gender dysphoria.’ This book explains what it is, how it has spread, and what we can do about it. And Irreversible Damage is as readable as it is important.”

“Writing honestly about a difficult and vital topic, Shrier compassionately analyzes the evidence regarding rapid-onset gender dysphoria (ROGD), a phenomenon declared off-limits by many in the media and the scientific establishment. Shrier simply isn’t willing to abandon the future of a child’s mental health to propagandistic political efforts. Shrier has actual courage.”

—Ben Shapiro, editor in chief of The Daily Wire and host of The Ben Shapiro Show

“In Irreversible Damage, Abigail Shrier provides a thought-provoking examination of a new clinical phenomenon mainly affecting adolescent females—what some have termed rapid-onset gender dysphoria—that has, at lightning speed, swept across North America and parts of Western Europe and Scandinavia. In so doing, Shrier does not shy away from the politics that pervade the field of gender dysphoria. It is a book that will be of great interest to parents, the general public, and mental health clinicians.”

—Ray Blanchard, Ph.D., head of Clinical Sexology Services at the Centre for Addiction and Mental Health from 1995–2010

“Abigail Shrier dares to tell the truth about a monstrous ideological fad that has already ruined countless children’s lives. History will look kindly on her courage.”

“Abigail Shrier has written a deeply compassionate and utterly sobering account of an unprecedented and reckless social experiment whose test subjects are the bodies and psyches of the most emotionally vulnerable among us.”

—John Podhoretz, editor of Commentary magazine and columnist for the New York Post

“For no other topic have science and conventional wisdom changed—been thrown away—more rapidly than for gender dysphoria. For a small but rapidly growing number of adolescent girls and their families, consequences have been tragic. This urgently needed book is fascinating, wrenching, and wise. Unlike so many of the currently woke, Abigail Shrier sees clearly what is in front of our faces and is brave enough to name it. Irreversible Damage will be a rallying point to reversing the damage being done.”

—J. Michael Bailey, author of The Man Who Would Be Queen and professor of psychology at Northwestern University

“Abigail Shrier has shed light on the profound discontent of an entire generation of women and girls and exposed how transgender extremists have brainwashed not just these young women, but large portions of the country.”

—Bethany Mandel, editor at Ricochet.com, columnist at the Jewish Daily Forward, and homeschooling mother of four

“Every parent needs to read this gripping travelogue through Gender Land, a perilous place where large numbers of teenage girls come to grief despite their loving parents’ efforts to rescue them.”

“Gender transition has become one of the most controversial issues of our time. So much so that most of us simply want to avoid the subject altogether. Such evasion can be just the thing that gives the majority an excuse to look away from the suffering of our fellow human beings. Abigail Shrier chooses to take the bull by the horns. She dives straight into this most sensitive of debates. The product is a work brimming with compassion for a vulnerable subset of our population: teenage girls. It is a work that makes you want to keep reading because it is accessible, lucid and compelling. You find yourself running out of reasons to look away. A must-read for all those who care about the lot of our girls and women.”

“Shrier’s timely and wise exploration is simultaneously deeply compassionate and hard-hitting. First carefully laying out many of the physical, psychological, and societal effects of the ‘transgender craze,’ she then points to the inconsistencies within the ideology itself. This book deftly arms the reader with tools for both recognizing and resisting, and will prove important for parents, health care professionals, and policy makers alike.”

“If you want to understand why suddenly it seems that (mostly) young girls from (mostly) white middle- or upper-class backgrounds (many of whom are in the same friend groups) have decided to start dressing like boys, cutting their hair short, changing their name to a masculine one, and even taking hormones, using chest compressors, and getting themselves surgically altered, you must read Abigail K. Shrier’s urgent new book, Irreversible Damage.”

Abigail Shrier is a writer for the Wall Street Journal. She is a graduate of Columbia College, where she received the Euretta J. Kellett Fellowship; the University of Oxford; and Yale Law School. She lives in Los Angeles, CA.