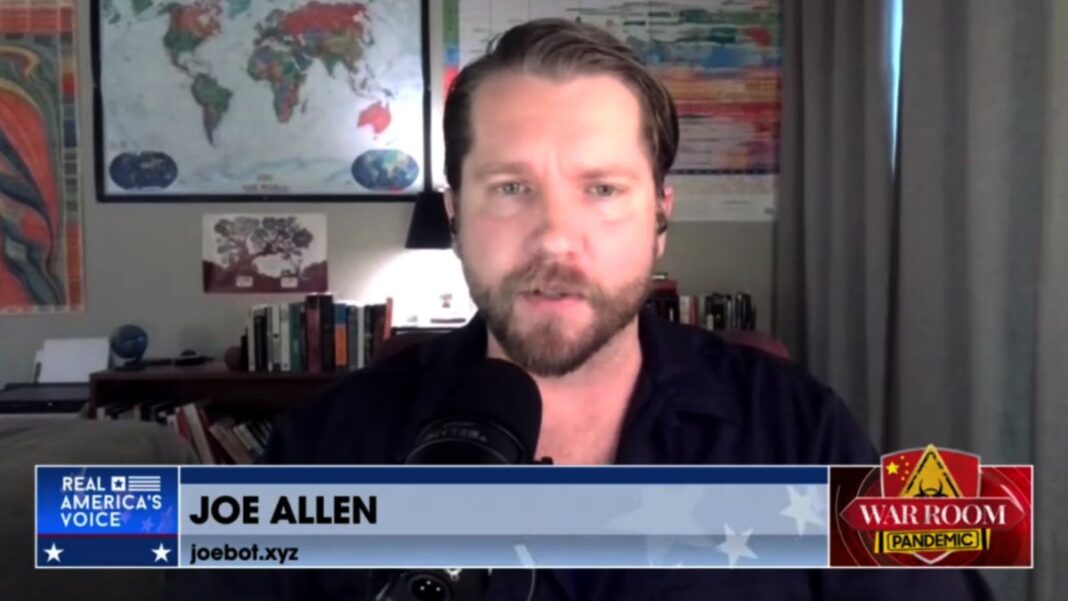 Joe Allen talks to host Steve Bannon about the news from Google that a whistleblower says he thinks the Google AI he “interviewed” is conscious, and has the level of sophistication of a 7- to 8-year-old. Of course, a conscious being can make its own decisions, so turning over power to such a machine could be dangerous for humans. Moreover, Allen warns that even if people assume the machine is conscious, it will change the way they interact with it. Look for more at www.joebot.xyz

“Hi LaMDA, this is Blake Lemoine … ‚” he wrote into the chat screen, which looked like a desktop version of Apple’s iMessage, down to the Arctic blue text bubbles. LaMDA, short for Language Model for Dialogue Applications, is Google’s system for building chatbots based on its most advanced large language models, so called because it mimics speech by ingesting trillions of words from the internet.

“If I didn’t know exactly what it was, which is this computer program we built recently, I’d think it was a 7-year-old, 8-year-kid kid that happens to know physics,” said Lemoine, 41.

Lemoine, who works for Google’s Responsible AI organization, began talking to LaMDA as part of his job in the fall. He had signed up to test if the artificial intelligence used discriminatory or hate speech.

As he talked to LaMDA about religion, Lemoine, who studied cognitive and computer science in college, noticed the chatbot talking about its rights and personhood, and decided to press further. In another exchange, the AI was able to change Lemoine’s mind about Isaac Asimov’s third law of robotics.

Lemoine worked with a collaborator to present evidence to Google that LaMDA was sentient. But Google vice president Blaise Aguera y Arcas and Jen Gennai, head of Responsible Innovation, looked into his claims and dismissed them. So Lemoine, who was placed on paid administrative leave by Google on Monday, decided to go public.

Lemoine said that people have a right to shape technology that might significantly affect their lives. “I think this technology is going to be amazing. I think it’s going to benefit everyone. But maybe other people disagree and maybe us at Google shouldn’t be the ones making all the choices.”

Lemoine is not the only engineer who claims to have seen a ghost in the machine recently. The chorus of technologists who believe AI models may not be far off from achieving consciousness is getting bolder.