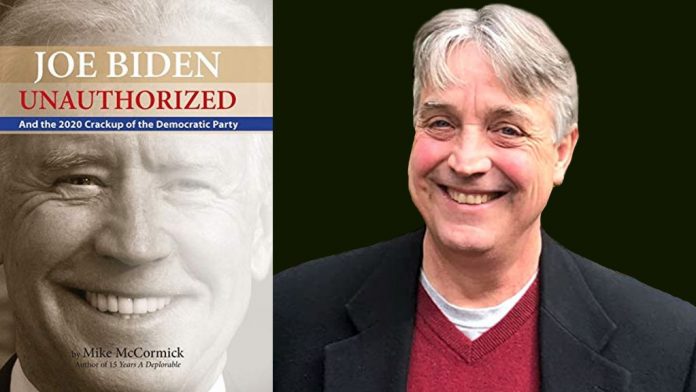 This book is the must-have truth about the Obama White House coverup of Joe Biden’s crooked dealings in Ukraine.

Fast-paced and full of insider knowledge, this book reveals Joe Biden’s malfeasance for using his Office of the Vice President to enrich his son Hunter in a quid pro quo as he directed U.S. assistance to Ukrainian natural gas company Burisma Holdings in 2014.

Mike McCormick’s eyewitness account is clear and accurate because he was there in Ukraine and Poland with Joe Biden, as his primary stenographer.

Reasonable Americans will understand that this book exonerates President Donald Trump because he was right to ask for an investigation into a corrupt former vice president!

What’s worse for the Democrats is that from 2014 to the present, President Barack Obama is guilty of conspiring with his senior advisors to cover up Joe Biden’s malfeasance in Ukraine by withholding that information from the public as the House Democrats initiated their partisan impeachment of President Trump.

And they’re still trying to get away with it!

By the way, have you heard any reporting about Joe Biden’s malfeasance or the Obama White House covering it up? No, not at all. But you can read the grimy details here in this book!

Author Mike McCormick sheds sunlight on a sordid episode of American history! Read how Biden rebuffed Axelrod’s warning in a private meeting over breakfast at the Vice President’s Residence. View screenshots of White House visitor logs that put Joe Biden at the center of an effort to enrich his son Hunter and his business partner Devon Archer in a quid pro quo for his efforts on behalf of Burisma Holdings — using U.S. taxpayer money!

But this book is about far more than Joe and Hunter’s crooked dealings in Ukraine.

Will voters think Joe Biden is strong enough to defeat Donald Trump if they know he was humiliated by Vladimir Putin in Moscow during the Russian “reset”?

Will voters think Joe Biden is smart enough to be president if they know he squandered $1.5 billion in taxpayer money by giving it to Honduran drug dealers and corrupt government leaders in Guatemala and El Salvador to stem the flow of unaccompanied minors?

Will voters think Joe Biden has proven experience if they know he was careless and weak in personal appearances in China and Turkey? How about the tragedy of his failed management of withdrawing U.S. troops from Iraq?

Those who think Joe Biden is their best hope are in for a serious reckoning in the 2020 election. The Democratic Party is cracking up, and the reasons are in this book, especially in the chapters titled — Hollywood, Gays, and Guns and The Best Joe Biden Speech You Never Heard.

But this is not an anti-Joe hate-fest. Reasonable readers will also appreciate the author’s recounting of Joe Biden’s best moments and actions during his vice presidency. This is tough but fair truth told about a flawed American politician who should be respected, yes, but certainly not elected president.

If you are a reasonable American exhausted by the ocean of BS you need to navigate to get the truth about our politicians, you want this book. Buy it! Read it! Recommend it!

“My case is a little different, though, because unlike most reasonable Americans, I actually worked closely with those political leaders. I was a stenographer in the White House Press Office for the Bush, Obama, and Trump administrations from 2002 to 2018.

“It was an exciting job. History happened right in front of me. But then so did a lot of BS. I saw it and heard it firsthand. Much of it the media told you about, but some of it they didn’t.

“That’s why I’m writing this book, to fill in that gap. And since I worked primarily for Vice President Joe Biden during the Obama years, I can tell you a lot about Middle Class Joe, the White House Optimist.

“Talk about an ocean of BS.”

“…Because in my opinion the meeting with President Obama, David Axelrod, David Plouffe, and Jim Messina evolved into an Obama White House cover-up of Joe Biden promoting Burisma Holdings as a quid pro quo for that company giving his son Hunter a lucrative position on its board…If Barack Obama, David Axelrod, David Plouffe, and Jim Messina KNEW in April 2014 the Joe Biden was corrupting his vice presidency (and their administration) to enrich his son, and they withheld that knowledge from their Democratic colleagues as they pursued the impeachment of President Donald Trump in 2019-2020, they have the sown the seeds of destruction of their Democratic Party.”

“…The most powerful man in Russia had neither fear nor respect for Joe Biden. He had just played with him for sport…That’s what I saw. But American voters didn’t get to see it like that. Make no mistake about it, Vladimir Putin had just delivered a public humiliation — I’d call it a bitch slap — to Joe Biden, Team Obama’s foreign policy expert.”

“…Up until Joe Biden’s intervention, “evolving” was the best Barack Obama could offer LGTBQ Americans.

“And so back to our Hollywood host, and his plaintive question, “how do you feel about us” — well, fortunately for that gentleman and American history, he got Joe Biden at his best. And then, because he was the vice president of the United States who deeply desired to be THE president, so did we all.

“That question and the gentleman’s tremulous delivery of it struck the tuning fork of Joe’s political soul and his instinctive response brought our country one giant leap closer to a more perfect union.”

“…And as that country that loves its warriors, we need a commander-in-chief who can lead our indispensable nation by being clear, honest, and direct with us about why we need to wage a war, all the while knowing what it will do to the warriors we love. We need a commander-in-chief who is decisive and lethal — no matter how much criticism that generates.

Joe Biden loves the troops, but he was indecisive and careless in their drawdown. Chaos, suffering and death are his legacy in Iraq.

He will never be our commander-in-chief.”

“…Joe’s speech was the last best gasp before his party embraced intolerance and divisiveness over compromise and consensus.

“I worked for Team Obama in their White House. I heard what they said. I saw what they did. They are the co-creators of our divided country. For me to say anything less is a lie.”

“My case is a little different, though, because unlike most reasonable Americans, I actually worked closely with those political leaders. I was a stenographer in the White House Press Office for the Bush, Obama, and Trump administrations … It was an exciting job. History happened right in front of me. But then so did a lot of BS. I saw it and heard it firsthand. Much of it the media told you about, but some of it they didn’t.”

“Working for Joe Biden as his stenographer for six-plus years meant discretion was built into my job requirements. It was my duty not to say what I saw and heard unless it was within the boundaries of official business. But that duty with Joe ended in the winter of 2017.

“And then one year later, after working as a stenographer in Donald Trump’s White House, I left that job and wrote my first book, Fifteen Years A Deplorable: A White House Memoir.
I’m proud of that book and the tough truths it relates. It centered on my experiences from the inside with biased White House journalists, unreported shortcomings of the Obama White House, Hillary Clinton’s hapless 2016 presidential campaign, and the genius of President Donald Trump.

This book is different. In it I focus specifically on one major American politician, Vice President Joe Biden. I am not spewing hate — there’s more than enough of that being done. On both sides. But I am writing the truth — the good and the bad. This isn’t hearsay, this is “I say”. These are the things I saw.”

About his dedication to Presidents Bush, Obama, and Trump Mike says:

“I hear every day about the hate that has consumed our country, especially in the political arena. From my White House vantage point I’ve watched our war of words increase in scope and ferocity over the past 15 years to a point where people who shouldn’t hate each other do.

“But as a grateful White House veteran, I believe deep in my heart our democracy will eventually resolve it. Eventually… Presidents are amazing people. My time among them requires me to state unequivocally: Our presidents love our country. Our presidents work hard for our country — all of our country, every single citizen in it. Our presidents don’t deserve our hate.”