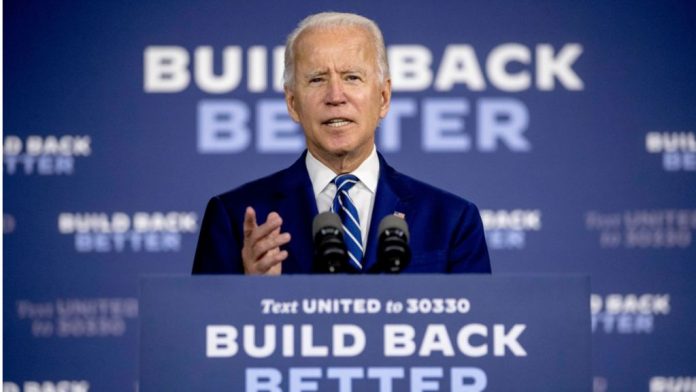 Joe Biden’s strategy to become president appears to be (a) make sure people don’t confuse him with Donald Trump, and (b) worry only about appealing to voters on the Democratic Party’s left flank. Looking at today’s polls, it just might work.

Then again, it might not. That strategy encourages Mr. Biden to be mentally lazy while providing Team Trump with openings they can exploit.

Take the presumptive Democratic presidential nominee’s appearance Monday as Joy Reid’s inaugural guest on her new MSNBC show. Ms. Reid began by encouraging Mr. Biden to pummel President Trump on the coronavirus, which he did with gusto. “There’s no leadership,” Mr. Biden thundered. “He has no idea what to do.”

Rather than challenge him on that, Ms. Reid asked Mr. Biden what he would do differently as president. His answer sounded good initially but doesn’t amount to much.

The former vice president swung into his spiel: “I talked early on about the Defense [Production] Act” to order companies to manufacture essential items, he said. Mr. Trump invoked the DPA March 27 to force General Motors to step up ventilator production.

To help the economy, Mr. Biden proposed to “make sure that people are in a position where they can maintain their businesses.” Mr. Trump signed the Cares Act on March 27, providing $349 billion in partially forgivable small-business loans, later raised to $659 billion. His next idea was to guarantee “no one has to pay for contracting Covid and being treated for Covid.” The Trump administration announced April 3 it would use Cares Act money to pay hospitals that treat uninsured people for Covid-19.

With regard to a vaccine, Mr. Biden said it was essential to “have a command officer now . . . to put together exactly how that will be distributed to over 300 million Americans.” Gen. Gustave F. Perna, head of Army Materiel Command, was appointed chief operating officer of Operation Warp Speed on May 15 to accelerate vaccine production and distribution.

Can Mr. Biden come up with a single action to fight Covid-19 the Trump administration hasn’t already taken? The same week, Mr. Biden bragged of the 2009 stimulus bill’s (nonexistent) “shovel-ready jobs” and called the mob in Portland, Ore., “peaceful protesters”—never mind that they’re armed with metal pipes, hammers, slingshots with ball bearings and hand-held lasers to flash in the eyes of police, and that they’ve disrupted Portland nightly for almost eight weeks.

If Mr. Biden ever faces scrutiny from a tough-minded journalist—as Mr. Trump did Sunday in Chris Wallace on “Fox News Sunday”—voters might wonder whether he’s up to the job.

Then there are Mr. Biden’s recent policy announcements. Jam-packed with radical ideas, if they get attention they could spook suburbanites who’ve confused him for a traditional Democrat, not a left-winger.

The former vice president’s July 9 economic plan, for example, proposes to raise $3.2 trillion in revenue over the next decade. It would do so by increasing taxes not only on the top 1% but on every American. The nonpartisan Tax Foundation says it “would lead to lower after-tax income for all income levels” and reduce the nation’s gross domestic product.

Another example: Mr. Biden’s July 14 climate plan calls for closing every natural gas and coal-fired power plant within 15 years. They now produce 60% of America’s electricity. It’s probably impossible to achieve, but even trying would raise everyone’s utility bills and endanger millions of jobs in the energy and power sectors.