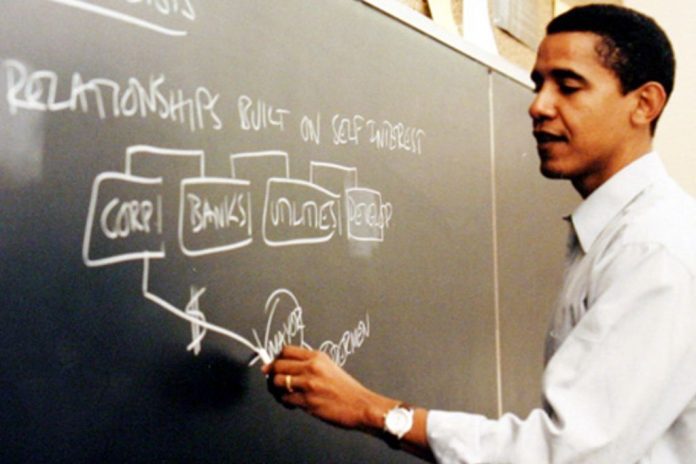 The highest tenured faculty member at Chicago Law spoke out on Barack Obama saying, “Professors hated him because he was lazy, unqualified, and never attended any of the faculty meetings.”

Doug Ross reported this and more:

I spent some time with the highest tenured faculty member at Chicago Law a few months back, and he did not have many nice things to say about “Barry.” Obama applied for a position as an adjunct and wasn’t even considered. A few weeks later the law school got a phone call from the Board of Trustees telling them to find him an office, put him on the payroll, and give him a class to teach. The Board told him he didn’t have to be a member of the faculty, but they needed to give him a temporary position. He was never a professor and was hardly an adjunct.

The other professors hated him because he was lazy, unqualified, never attended any of the faculty meetings, and it was clear that the position was nothing more than a political stepping stool. According to my professor friend, he had the lowest intellectual capacity in the building. He also doubted whether he was legitimately an editor on the Harvard Law Review, because if he was, he would be the first and only editor of an Ivy League law review to never be published while in school (publication is or was a requirement).

This photo of Barack Obama teaching in Chicago was posted in February 2008 at PrestoPundit. In this class Barack Obama was teaching his students the principles of Saul Alinsky. Notice the flow chart indicating the flow of money and power out of productive businesses (“CORP”) and into the political class (“MAYOR”):

The heading at the top reads “POWER ANALYSIS”. The sub-heading reads “RELATIONSHIPS BUILD ON SELF INTEREST”. The symbol on the arrow between “CORP” and “MAYOR” is the “$” sign.

Saul Alinsky came up with the idea of power analysis, which looks at relationships built on self-interest between corporations, banks and utilities. Barack Obama was teaching students in Chicago the Alinsky Principles.

Of course, this is not a surprise. After watching the bribes, kickbacks, lies and threats this past year as Democrats fought to take over the health care industry, it’s obvious that the only subject Obama excels at is Alinsky’s Rules For Radicals.

More… Isn’t it a bit odd that the only photo we’ve seen of Obama teaching, he’s explaining the Alinsky principles?