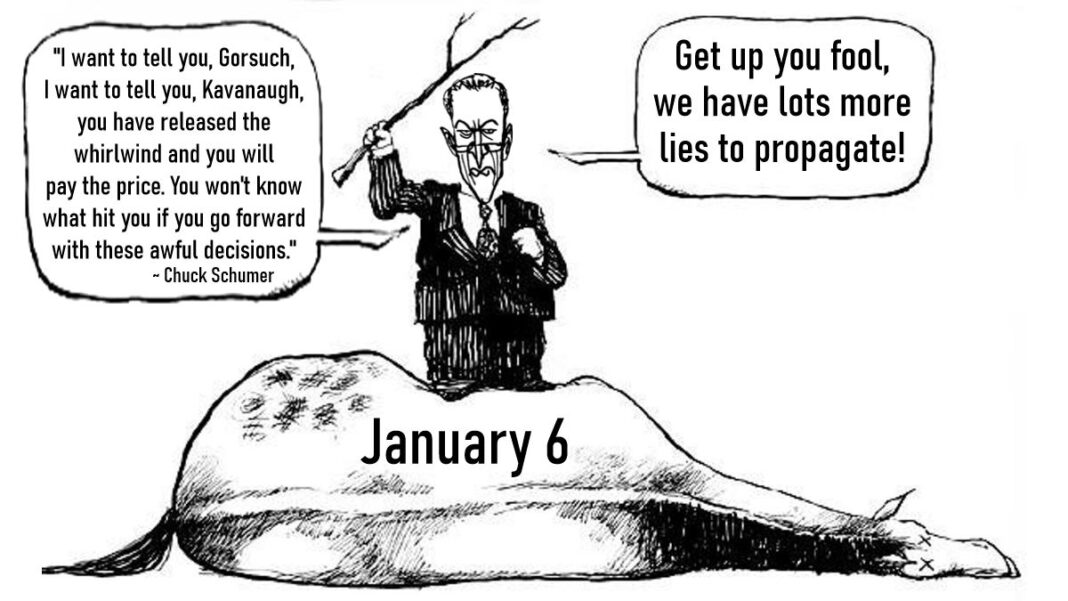 It is easy to spot when leftist Democrats and their RINO lackeys are most fearful of the truth. That is when they lie the loudest, and most brazenly. And this perfectly describes the orchestrated spectacle we are once again witnessing from Capitol Hill. Yes America, the D.C. Swamp is dredging up all of its phony hysteria over the January 6 2021 Capitol episode, including drama-queen “testimonies” and edited videos that are so deliberately misleading, they could make the “National Enquirer” green with envy.

This bald-face leftist scam of a “hearing” is being perpetrated in hopes of deflecting attention from the Democrats’ own massive baggage of glaring corruption and disrepute reaped from their lengthy litany of policy disasters. Right according to plan, their abhorrent agenda is wreaking unprecedented havoc on America.

They have multiple reasons to force yet more of their shameless grandstanding and self-righteous platitudes on us. First, as the Nation enters into high gear of the Mid-Term election season, Democrats cannot afford to allow the focus of common folk to remain on their consistently abhorrent agenda, from the horrendous foreign “blunders” (purposeful treason is the better descriptor), to soaring gas prices, to the wholesale invasion going on at the Southern Border. When combined with the realization that such planned catastrophes are being intentionally perpetrated by an illegitimate cabal pretending to be the duly elected government, could push tempers in the Heartland beyond “critical mass.”

So the entrenched elites must convince “We the People” that any response, other than fawning obedience to their treachery, is the gravest of crimes to be committed against them. But that ruse isn’t working anymore. So, in typical fashion, when the old lies have become too stale and implausible to resonate with the public, it’s time to ramp up the shrillness and melodrama.

Lets ignore… the stolen election, Afghanistan, inflation, third world style shortages, crashing markets, the rampant institutional poisoning of the minds of young school children and indoctrination of the Military to a grave and perverse worldview. Let’s ignore the vast web of Biden and Clinton family corruption, by which the safety and integrity of the United States has been sold off to the highest bidder. Instead, over in the center ring, we see that President Trump attempted to stage a coup, by conducting a massive peaceful protest, in which a cadre of leftist infiltrators, fully coordinated with FBI plants, trespassed inside the US Capitol, which we all know belongs solely to the “Ruling Class.”

As many times as leftists/Democrats make this hysterical claim, it needs to be rebutted with the reality that, were the event actually a “coup,” those million or more angry Americans would have been well armed, and barring a military response on the order of the D-Day invasion, would still be there. And had they stayed in place, they no doubt would have been joined by many others. There are plenty more justly angry Americans ready to join the cause. Under such circumstances, the event certainly would not have dispersed with the mere mention by President Trump that it was time for those in attendance to go home. What “coup” ever ends that way?

Yet with tempers rising to a boiling point across the land, the message of this sham in the Congress must be driven home to the people. The lowly masses no longer have any right to confront the elites for a redress of their grievances, and must simply accept the leftist onslaught on them in silent compliance. Fake News outlets behave as if nothing questionable happened in the stolen election of 2020. Alternative media that dares to deviate, even in the slightest, from this state approved message is mocked and threatened aggressively. And under such pressure, several former stalwarts of truth have indeed buckled.

As despicable and surreal as it may seem that such things could actually be happening in our once great Nation, this manner of oppression is standard fare when a formerly free people lose their liberty and justice, and find themselves subjugated to a hostile government operating wholly without the “consent of the governed.”

Ultimately, both sides in this war are showing their true colors. Make no mistake. Every American who either promotes the leftist narrative, or refuses to very publicly stand up to it and denounce it, is complicit. The idea of “getting along,” or “building bridges” with this enemy is no more applicable here and now then it would have been to do so with Hitler’s Reich, or with the Japanese after the December 7, 1941 attack on Pearl Harbor.

The elites (and that includes conspirators from both parties) are clearly signaling their intention to fortify their position to their own benefit, despite horrendous damage to the lowly peasantry (which is how they view the rest of us). They have absolutely no intention of “coming clean.” That is simply not how they operate. So it is inevitable that the fraud and treachery will only escalate.

Yet even in the face of such coordinated propagandizing, Real America is digging in, and refusing to accept their treasonous narrative. The entire situation hinges on a single precept that can make or break the leftist Democrat facade of legitimacy. And that is the prospect of President Trump backing down from his unwavering declarations of the stolen election. A lesser man would already have done so, and the leftist takeover could then be complete. But having first hand experience with the venomous duplicity of the left, and having seen the evil that such a move would unleash upon the Nation, President Trump is not about to enable that monster.

Instead, he is calling it out as it should be called out. In a June 9 statement, President Trump bluntly characterized Pelosi’s Kangaroo Court as an “Unselect Committee of political Thugs, essentially the same group who brought you the now fully debunked and discredited RUSSIA, RUSSIA, RUSSIA HOAX (and many others).” He went on to explain how the leftist swamp “refused to study and report on the massive amount of irrefutable evidence, much of it recently produced, that shows the 2020 Presidential Election was Rigged and Stolen.” So at “Crunch Time,” President Trump once again refuses to step into their now wholly predictable snares.

The single condition on which success or failure of the leftist Alinsky Strategy hinges, is whether or not its intended victim accepts its premises. Since those are invariably lies (by definition, leftist ideology and tactics cannot be anything else), standing up to them deals the ultimate death blow from which they cannot recover. But don’t expect them to give up and start playing fair. The lies, the fraud, and the hypocrisy will continue. Such vile and insidious methods are all they have.