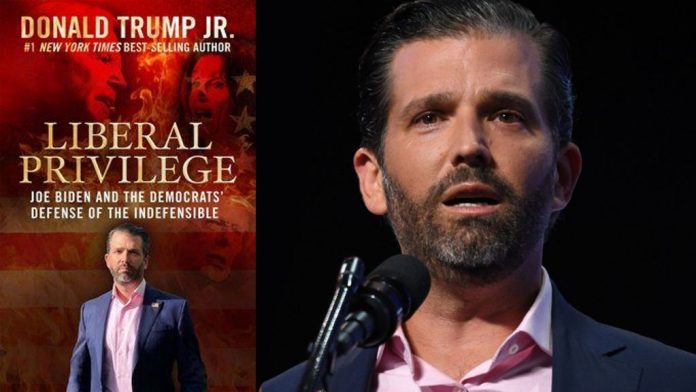 While everyday Americans strive to make an honest living by working hard, liberals within the swamp have perfected a way of barely working while elevating themselves above all of us. LIBERAL PRIVILEGE will take you behind the scenes of the swamp, just as the nation gears up for the next presidential election. In his second book, #1 New York Times best selling author, Donald Trump Jr reveals the truth the media has long refused to cover. Read about the countless liberal scandals, years of entrenched racism in the democrat party and decades of failed polices that will paint a stark picture of LIBERAL PRIVILEGE.

As President Donald J. Trump seeks a second term based on real accomplishments, learn about the facts the media refuses to cover. As woke liberals attempt to burn our cities, abolish capitalism and rewrite history, liberals stand idly by encased by political correctness and guilt. Donald Trump Jr masterfully eviscerates critics in LIBERAL PRIVILEGE in a raw, witty and very direct way. Few American families have accomplished so little and benefited so much as the Biden’s. Through corruption, grift, and sheer greed – Joe Biden, Hunter, and the rest of the clan have exemplified LIBERAL PRIVILEGE. No other book will paint a sharper contrast this election season. A must read for anyone this election season!

Donald Trump Jr. is the eldest son of President Donald J. Trump. He is executive vice president at Trump Organization, where he has overseen major construction projects in New York City, Chicago, Las Vegas, and many countries internationally.