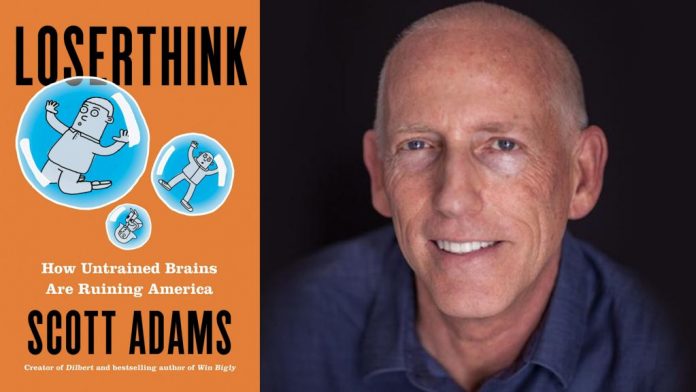 From the creator of Dilbert and author of Win Bigly, Loserthink: How Untrained Brains Are Ruining America is a guide to spotting and avoiding loserthink: sneaky mental habits trapping victims in their own bubbles of reality.

If you’ve been on social media lately, or turned on your TV, you may have noticed a lot of dumb ideas floating around.

“We know when history will repeat and when it won’t.”
“We can tell the difference between evidence and coincidences.”
“The simplest explanation is usually true.”

If we’re not careful, loserthink would have us believe that every Trump supporter is a bigoted racist, addicts should be responsible for fixing the opioid epidemic, and that your relationship fell apart simply because you chewed with your mouth open.

Even the smartest people can slip into loserthink’s seductive grasp. This book will teach you how to spot and avoid it–and will give you scripts to respond when hollow arguments are being brandished against you, whether by well-intentioned friends, strangers on the internet, or political pundits. You’ll also learn how to spot the underlying causes of loserthink, like the inability to get ego out of your decisions, thinking with words instead of reasons, failing to imagine alternative explanations, and making too much of coincidences.

Your bubble of reality doesn’t have to be a prison. This book will show you how to break free–and, what’s more, to be among the most perceptive and respected thinkers in every conversation.

“They say you shouldn’t judge a book by its cover, but they never tell you why. So I went ahead and judged it. Looks great!” – Juan Variable

“Don’t think of this book as something you ‘read.’ Think of it as ‘survival.’ And you want to survive, don’t you?” – M. Wordthinker

“If you love this book, you are probably part of a clandestine global conspiracy to control the world. You’ll probably deny it, but I know what you are thinking.” – Reed Mines

“The simplest explanation for why you will love this book is that it is the best book in the world. Duh. Simple.” – Sir William of Ockham

“This is the only book I have ever read. I highly recommend it because I can’t imagine how any other book could be better.” – Noah Mashnashun

“There are many similarities between this book and the Holy Bible. For example, they both use words. I’m not saying the author of this book is a deity, but obviously things are heading in that direction.”  – Matthew, Mark, John

“I don’t recommend this book, but only because I’m an unsuccessful author marinating in my hatred for those who have succeeded. If I ever write a book, imagine how great it would be!” – A. Badriter

Scott Adams is the creator of Dilbert, one of the most popular comic strips of all time. He has been a full-time cartoonist since 1995, after sixteen years as a technology worker for companies such as Crocker National Bank and Pacific Bell. His many bestsellers include The Dilbert Principle, Dogbert’s Top Secret Management Handbook, and How To Fail At Almost Everything And Still Win Big. He is co-founder of WhenHub and lives outside of San Francisco.

Film ‘mocks Christianity and ridicules people of faith’: A ‘tale of...