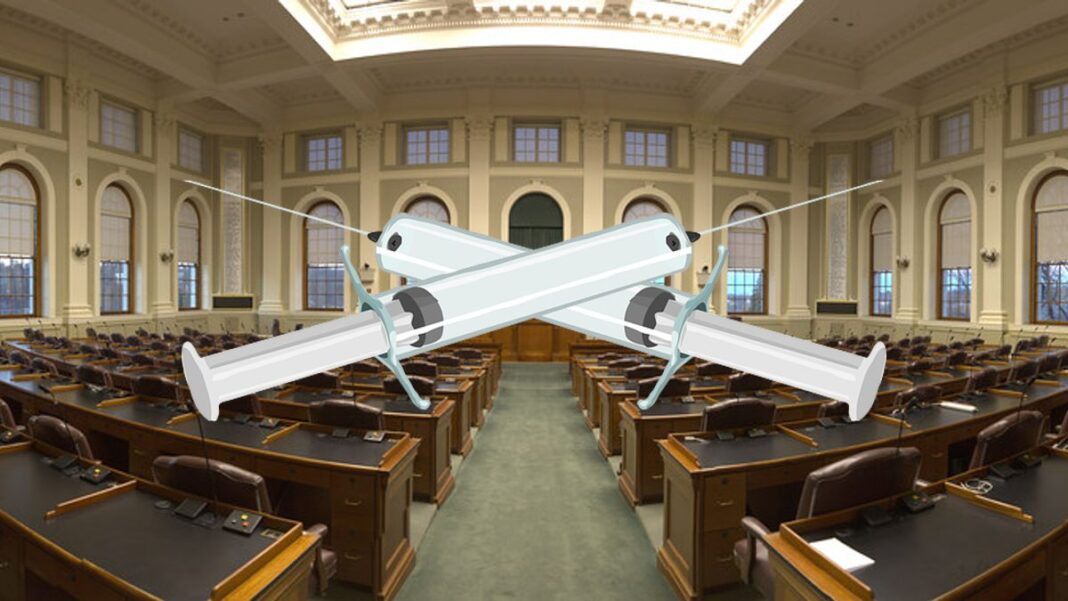 The Maine House of Representatives on Feb. 23 rejected a proposal calling for a five-year prohibition on all COVID-19 vaccine mandates in the state, which has some of the most restrictive orders in the nation.

By a 76–59 vote with 13 lawmakers absent, the Democratic-controlled Maine House voted down the measure. The chamber voted to forward it to the Senate for consideration.

Tiffany Tereck, a co-founder of Health Choice Maine who lobbied in support of the bill, told The Epoch Times that her group considers the fight against COVID-19 vaccine mandates far from over.

“We’re far from done with this fight,” Tereck said. The bill called for a five-year moratorium to allow for studies of the vaccine’s potential harm to pregnancies and reproduction.

The rejection by the Democratic-led House came just a day after the U.S. Supreme Court dismissed, without a finding, a petition filed by about 2,000 Maine health care workers challenging Mills’s elimination of religious exemptions from the vaccine mandate.

That made Maine one of only three U.S. states—along with New York and Rhode Island—whose COVID-19 vaccine mandate for health care workers doesn’t allow for religious exemptions. Mills added a warning that her administration would revoke the business license of any employer that granted such an exemption to an employee.

Matt Staver, founder and lead counsel of Liberty Counsel, told The Epoch Times he was “very disappointed” as well as “very surprised” by the Supreme Court’s rejection, especially given Justice Neil Gorsuch’s dissenting opinion of the court’s rejection of the Maine group’s emergency petition it filed in October, Staver said.

“Because there is no real dispute that the challengers are likely to be permanently harmed if the mandate remains in effect, the real question before the court in deciding whether to grant emergency relief was whether the challengers are likely to succeed on their argument that the vaccine mandate violates their right to freely exercise their religion,” Gorsuch wrote.

“The answer to that question is clear,” he wrote, “the mandate is unconstitutional.” He was joined by Justices Thomas Clarence and Samuel Alito in his support of the Maine petition.