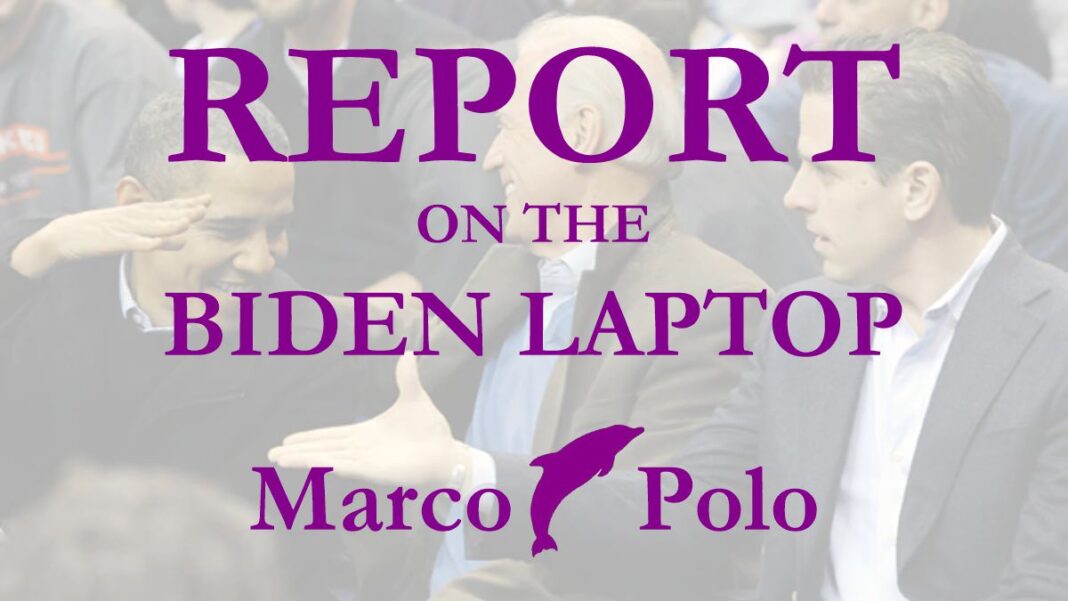 Marco Polo is a nonprofit research group exposing corruption and blackmail to drive an American renaissance. Given the explicit nature of the content on the Biden Laptop, this Report is for an adult readership. Errors are the fault of the authors alone and, if identified, will be amended immediately. Please send all inquiries and/or corrections to info@marcopolousa.org.

Providing a true and thorough account1 of any topic or period is a difficult endeavor, but it is especially so when one is not afforded the luxury of declassified documents or the passage of time which seems to clear the air of any contemporary—often political—hurdles to the truth. In fact, there appears to be an inverse relationship between the recency of events (scandalous, as is this account, or not) and the willingness of the associated parties to speak about them. The Marco Polo2 nonprofit research group set out in September 2021 to write a comprehensive Report on the Biden Laptop—which it possessed a copy of—fully cognizant of these limitations. Nevertheless, the group intends for this Report to stand the test of time for its thorough and sober explanation of the situation: the blatant social media oligopoly suppression,3 intelligence community (IC)4 and corporate media5 gaslighting, and cowardice of federal law enforcement to deliver justice to those who obviously committed crimes.

The Department of Justice (DOJ), specifically the Federal Bureau of Investigation (FBI), took possession of an Apple laptop previously used by Hunter Biden (Hunter) on 12/09/2019, following months of back-and-forth with a computer repair shop owner named John Paul Mac Isaac.6 Hunter had abandoned the device at Mac Isaac’s shop in Wilmington in April 2019. Based out of the Wilmington Resident Agency of the Baltimore7 Field Office (BAFO), FBI Special Agents Mike Dzielak8 (1-267-273-6744; DOB: 03/16/1971) and Josh Wilson9 (1-973-699-5695; DOB: 05/09/1978), both10 child pornography investigators, took weeks to respond to Mac Isaac, who wanted the device out of his shop because he believed it contained evidence of felonies. When the FBI agents finally acquired the laptop, their subpoena was issued under the pretense of a money laundering investigation.

This Report would not have been necessary if law enforcement had done its job. Dereliction of duty is nothing new for the FBI, as its government-sponsored11 cover-up occurred with Anthony Weiner’s devices.12 Additionally, besides a few notable exceptions, news outlets and think tanks in America have been unwilling to investigate and expose the hundreds of crimes and conflicts of interest on the Biden Laptop which—as you will read—definitively implicate the sitting pResident, Joe Biden (Joe).

As stated on our website masthead, the mission of Marco Polo is to expose corruption1836 and blackmail to drive an American renaissance.1837 Accordingly, the Biden Laptop was ripe for a thorough exposition. In fact, publishing material from the Biden Laptop lessens1838 any potential blackmailer’s power, as the threat of disclosure is no longer in their arsenal. Although the laptop1839 contains compromising material on dozens of figures in Hunter’s life, the DEGENERACY subsection in this ENDNOTES section includes only those images which feature Hunter or were sent to him, as those were arguably the only images relevant to U.S. national security (from a potential blackmailer’s perspective). For all of the alligator tears1840 and faux concerns about the supposed kompromat held by Vladimir PUTIN over Donald Trump, it is richly ironic that the Bidens’ sexual sins, drug abuse, and business-related184118421843 crimes1844 (not to mention evidence about Joe’s obvious1845 cognitive decline) are likely in the hands of every sophisticated1846 foreign intelligence agency on the globe.1847