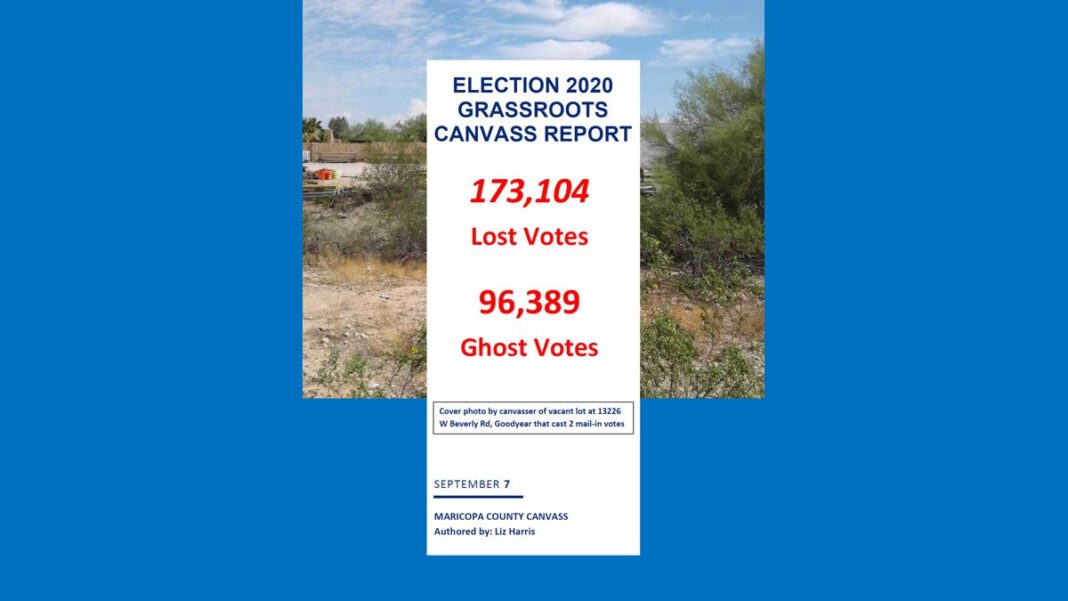 About The Above Video

Liz Harris, a private citizen who organized a canvass of the 2020 election in Maricopa County, Arizona, talks to Steve Bannon about her Voter Integrity Project findings on the Wednesday morning edition on “War Room.”

“We actually went to the homes of the registered voters, and the results are amazing,” said Harris. The report claims that there were 173,104 lost votes and 96,389 “ghost votes” in the election — just in Maricopa County.

“The results in the report are from the last two months of canvassing. … Our questions, they were really simple.  What method did you use to vote. Did you receive extra ballots? What did you do with those extra ballots? How many registered voters are supposed to be here, and how many actually voted? Not once do we ask who the person voted for.”

An estimated 173,104 votes are missing or lost, as reported to our volunteers who went door to door verifying registration and voting information for thousands of residents. These are American citizens living in Maricopa County who cast a vote, primarily by mail, in the election and yet there is no record of their vote with the county and it was not counted in the reported vote totals for the election. Additionally an estimated 96,389 mail-in votes were cast under the names of registered voters who were either unknown to the residents of the registration address or who were verified as having moved away prior to October 2020. Other irregularities were uncovered during the canvass at a smaller scale, including votes cast by mail from vacant lots, votes recorded from residents who had not actually voted, etc.

These results are a travesty to our democracy and our voting rights. In addition to impacted local races, such as Maricopa County Board of Supervisors District 1, decided by 403 votes, key statewide race margins are well within the numbers shown above. The Presidential race was decided by 10,457 votes statewide, and the U.S. Senate election was decided by 78,886 votes statewide.

It is obvious to anyone that voting by mail is ripe for fraud. The US Mail is not meant to be a secure transactional system. We have all known since we were children that you don’t send cash through the mail –our voting rights are far more sacred than cash. Bipartisan and Democrat Voter studies and commissions have found vote-by-mail to have the highest risk of fraud1 and most first-world democracies, such as Germany, either ban Vote-by-Mail outright or place very heavy restrictions on its use. Banning Vote-by-mail is a very simple solution to a huge problem for our Country. We cannot give up our fundamental right to vote, upon which America was built, simply because we are too lazy to go cast a vote in person.

Why does the problem of vote fraud exist?

Here, we can only speculate. But we all know that history often repeats itself, especially if forgotten.

It has become a modern day mantra that the right to vote by “secret ballot” is a sacred American right. But this is actually untrue. Until the late 1800s all votes in all States were public information. The move to the secret ballot occurred state-by-state from 1888-1950 to combat voter fraud. 2 Over the first 100 years of our great republic, a cottage industry was established in voter fraud vote buying and selling. Vote fraud was a massive problem for our Country. Moving to a secret ballot made it harder for vote buyers to monitor which candidates vote sellers had voted for. Voter turnout fell between 8% and 12% as the States adopted the secret ballot and people were no longer being paid to vote.

It is quite likely that many ridiculous and frivolous arguments were put forth in those States in attempts to prevent secret ballot legislation from passing by those who leveraged the vote fraud to win elections and those who profited from it.

We now see history repeating, with a system ripe for fraud and clear evidence of fraud occurring on a massive scale. The fraud likely existing as a means of revenue for those who are able to defraud the system, and for an easy way to shift election results for those who can pay. And again we have ridiculous and frivolous arguments being put forth against common sense legislation to secure the rights of honest American citizens to vote and have their vote count.

If I were to further speculate, I would say I believe that the people who work for and run Maricopa County are good people and likely have no idea that their voting process is being manipulated for financial gain. I believe it far more likely that small groups of bad actors (criminals) operating at local levels both here and in other parts of the country engineered ways to defraud their particular voting systems and processes and then likely sell those services to other mostly local small groups of bad actors who work for candidates fixing elections, probably most likely and most often unknown to the candidates themselves. That was the previous pattern in our Country and it makes sense. Far more likely than grand conspiracies and entire election departments being “in on it.”

The second citation below contains substantial information on vote fraud in history including recent history, as well as the mail-in voting bans in most developed nations.