“Life, Liberty, & Levin” host Mark Levin slammed the person behind the leak of the Supreme Court draft opinion on a case that could potentially overturn the 1973 landmark case Roe v. Wade. Tuesday on “Fox & Friends,” Levin labeled the actions as a “grave assault” on the institution.

MARK LEVIN: When you conduct yourself in an utterly lawless way, attacking the institutions of this country, attacking the founding documents of this country, attacking the history of this country, this is what you get: lawlessness. It’s just a matter of time. All these institutions are going to collapse. This is a grave assault on the Supreme Court. When I was in law school, I was actually an intern to Chief Justice Warren Burger. I saw how it operated, and I can tell you this institution takes its confidentiality seriously. Why? That’s the coin of the realm. They’ve got to be able to talk about ideas freely. They’ve got to be able to discuss this without political pressure. Why do people think these are lifetime appointments? Of course, the Democrat Party is destroying this country. Look at the confirmation process. It started with Bork. The Democrats targeted him under [Sen. Ted] Kennedy and Biden, and it moves on to others, including Clarence Thomas, including Kavanaugh. Republicans don’t treat Democrat nominees this way. They may object to them. When you say the Supreme Court doesn’t look like America, you’re undermining the credibility of the court. 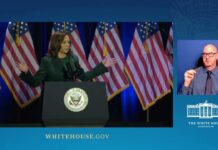