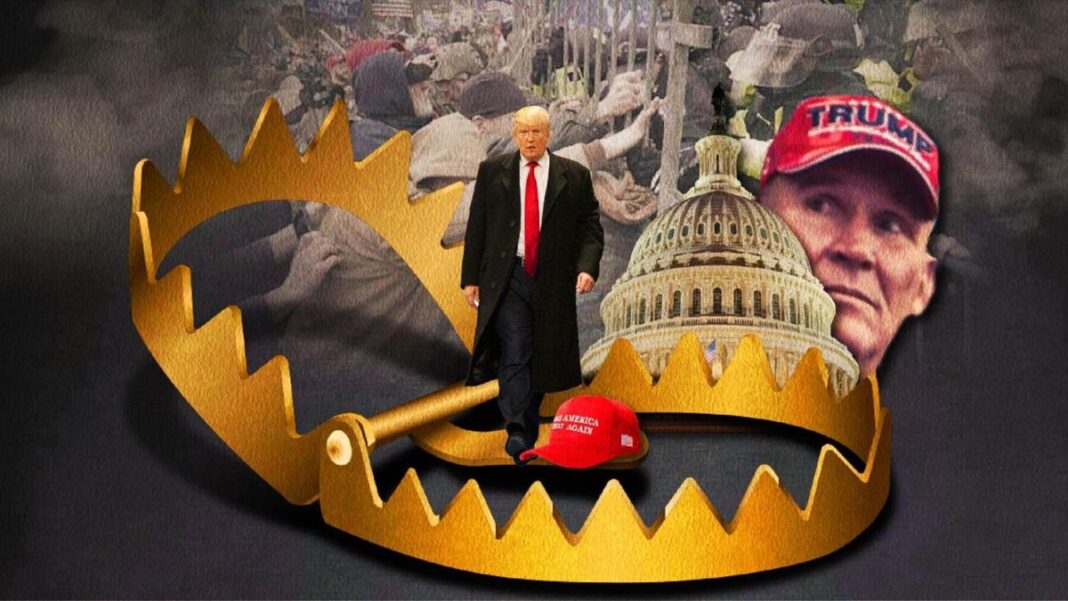 Six weeks ago, Revolver News published a blockbuster investigative report on Ray Epps — a man who, more than any other individual, appears to be the key unlocking the question of active federal involvement in the so-called “Capitol Siege” of January 6th.

Out of all of the thousands of January 6’s protesters, and the thousands of hours of publicly available footage from that fateful day, Ray Epps has turned out to be perhaps the only person nailed dead to rights confessing on camera to plotting a pre-planned attack on the Capitol. On both January 5 and January 6, Epps announced multiple times, at multiple locations, his upcoming plot to breach the US Capitol. He then spent hours attempting to recruit hundreds of others to join him. On top of it all, Epps was seen leading key people and managing key aspects of the initial breach of the Capitol grounds himself.

It would be one thing if Epps’s repeated calls on January 5 to “go into the Capitol” had simply amounted to bluster. But Epps followed through on his stated mission to shepherd others inside. In clips 4-6 of the above compilation, we see Epps actively orchestrate elements of the very first breach of the Capitol barricades at 12:50 p.m., while Trump still had 20 minutes left in his rally speech.

It is noteworthy that this Ray Epps breach occurs just one minute after Capitol Police began responding to reports of two “pipe bombs” located at DNC and GOP headquarters, respectively. Rather conveniently, the already-handicapped Capitol Police thus had still-fewer resources with which to respond to the barricade breach in question.

While the “pipe bombs” turned out to be a dud, the Ray Epps breach proved fateful. Today, the official stories told by the New York Times, the Wall Street Journal, and the US Justice Department all depict the apparent Ray Epps-orchestrated 12:50 p.m. initial breach of metal barricades as the “Big Bang” event of January 6.

In large part, this description is hardly an exaggeration. Indeed, it was the 12:50 p.m. breach of the Capitol grounds, in conjunction with a handful of suspicious individuals ripping down fencing and signage, that set in motion the conditions allowing for 1/6 to turn from a rally into a riot.

In this report, we will blow open this network of still-unindicted key operators who appear to have been at work either with or around Ray Epps during the initial Capitol grounds breach. You, dear reader, will be scandalized — though perhaps unsurprised — to learn that none of the actors covered in this report have received attention in the mainstream press, despite their active and indispensable roles in the events of 1/6.

As we explained in detail in our previous report, the FBI originally put Ray Epps’s face on its Capitol Violence “Most Wanted List” on January 8, 2021, just two days after 1/6. They offered a cash reward for information leading to his arrest. In fact, rank-and-file FBI agents initially deemed Epps’s role as an apparent riot organizer so important that they named him Suspect #16—one of the first 20 high-profile FBI targets in a database now packed with more than 500 suspects.

Then, six months later on June 30, 2021, both Revolver News and The New York Times published inconvenient stories that encouraged a more aggressive interrogation of the “Ray Epps third rail,” leading reasonable people to wonder why this publicly identified man on the Most Wanted List still had no charges filed against him.

The FBI responded to these important media stories the very next day. But their response was to quietly purge all online Ray Epps files from their website, then switch to a posture of “What? Who? Ray Epps? Never heard of him.”

Agents of the FBI Field Office in Phoenix (where Epps lives) have gone so far as to explicitly deny knowledge that Ray Epps even exists. Instead of pursuing Epps, FBI agents have instead pursued journalists (below) who had the temerity to ask Epps in person if he was a government operative. “I understand that, but I can’t say anything,” is all Epps would tell them.

The sham Congressional January 6 Commission seems to be going along with the charade of Ray Epps denialism. For all of its recent gesticulations about Mark Meadows’s benign text messages, the Commission has yet to express even a basic interest in Ray Epps or his communications leading up to and on January 6.

But the specter of Ray Epps, and the ominous questions his immunity raises, loom too large to be memory-holed by poorly coordinated efforts of government denial. In light of the above, it is both amusing and symbolically appropriate that despite the FBI’s attempt to purge Epps’s face from its “Wanted” database (and public denials of his existence from authorized agents), the FBI DC Field Office still features Ray Epps as a “Wanted” man in its current pinned Twitter image (look closely and you’ll find it).

The #FBI is still seeking information regarding people who committed violence at the U.S. Capitol on January 6. Visit https://t.co/AWQVD3Hx3Y to see photos and videos from current cases, and if you recognize someone, submit a tip at https://t.co/t8G7LO4hxu. pic.twitter.com/zxJuYvr8zD

If Epps turns out to have been some kind of government operative, which at present is the only clean and simple explanation for his immunity, it is game over for the official “MAGA insurrection” narrative of 1/6. Epps was the day’s loudest riot recruiter, and its apparent leader of the very first breach of Capitol grounds. If Ray Epps is a Fed, the “Insurrection” becomes the “Fedsurrection” in one fell swoop.

These are the stakes at play in unraveling the Ray Epps enigma.

But it is imperative to note that if Epps was just a cog in a much larger federal operation, he would not have been deployed alone. Historically speaking, when Feds have orchestrated fake mobs of fake protesters, or contrived fake conspiratorial plots, the Feds’ own assets have commonly comprised between 16% to 25% of the plot’s participants, at least in its key respects. Indeed, the FBI once flew in 1,600 rowdy spooks to infiltrate a single convention with just 10,000 protesters.

In recent times, attacks blamed on right-wing militias have blown past the 16% mark on the Fed Saturation Index and have been clocking in at a whopping 25-50%. As Revolver has previously noted:

Students of FBI history should quickly absorb the lesson that infiltrating Feds are like roaches: whenever you spot one, it is guaranteed there are dozens of others nearby. Feds simply never, ever, operate alone. This is how you end up with at least 12 FBI informants in a tiny “right-wing” Michigan militia plot from October 2020 (that’s just informants, not even agents), 15 informants in the “right-wing” 2016 Malheur plot, dozens in the 2014 Bundy Ranch affair — including six FBI undercover agents posing as fake documentarians shooting a fake documentary — and the list goes on.

So if Ray Epps was instructed by the government to play his part in various recruiting, breaching and crowd control efforts that day, we would expect many other informants to be set up around him.

To test this hypothesis, Revolver spent the past six weeks comprehensively mapping Ray Epps’s network of interactions on January 6, and profiling the key people around him who complemented his efforts. We did a deep dive into other key figures involved in the initial breach of the Capitol grounds, as well as figures who played an instrumental role in fence removal and crowd control. In short, we investigated key players whose early actions on 1/6 turned the rally into a riot.

Read The Full Article and Watch The Video Evidence on Revolver.News