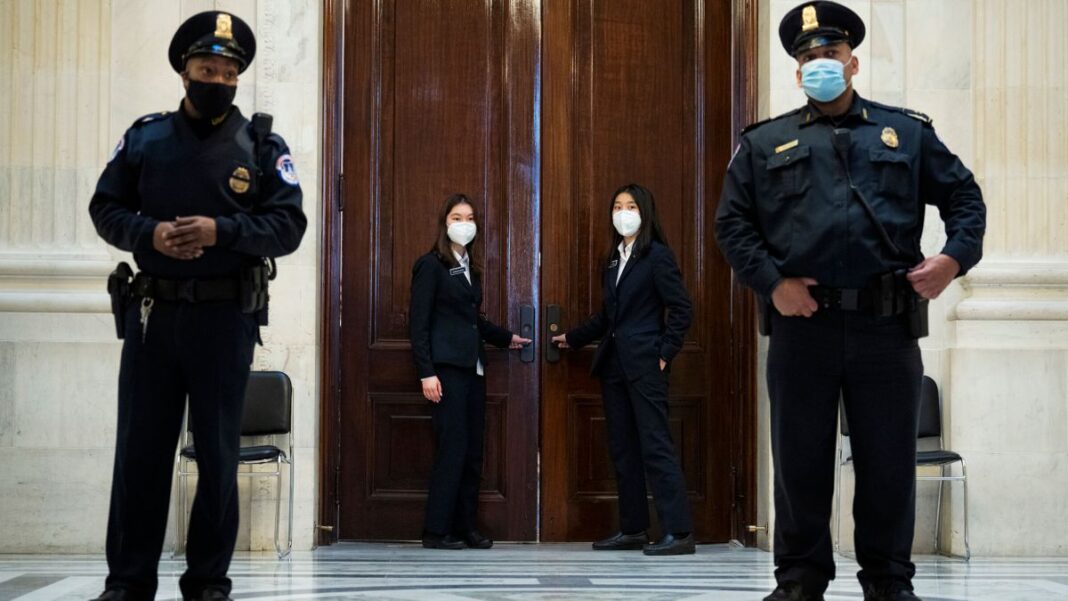 Capitol police, acting as the Stasi of the Democratic Party, will collect dirt on Republicans under the pretense of national security then leak gossipy details to an always-compliant news media.

When most Americans hear the term “Capitol Police,” they likely conjure visions of uniformed officers manning metal detectors at the numerous congressional buildings or helping tourists navigate the sprawling Capitol grounds: a D.C. version of a mall cop.

That imagery, however, is in stark contrast to reality as Democrats have weaponized yet another federal agency to target their political enemies on the Right.

After January 6, 2021, Capitol Police officials announced plans to expand beyond the legislatively authorized purview of the agency and open offices in Florida and California, as well as in other states. Congress overwhelmingly supported a bill last year to fork over $2.1 billion in new funding to the Capitol Police. Now flush with cash and immune from any serious public oversight, the agency is returning the favor by spying on dissidents of the Biden regime.

According to Politico, Capitol Police investigators are preparing secret dossiers on lawmakers, congressional staff, donors, and even constituents who visit their representatives in public or in private.

Investigators are asked to scour social media accounts and even examine “tax and real estate records to find out who owned the properties that lawmakers visited.” In one example, Capitol Police analyzed a fundraiser held in a private home for Senator Rick Scott (R-Fla.). Donors to House Minority Whip Steve Scalise (R-La.), who was shot by a Bernie Sanders supporter in 2017, also are under Capitol police scrutiny.

Far from ensuring the safety of legislators and their staffs, the underlying political motive is obvious to anyone who’s been paying attention the past several years: the Capitol Police, acting as the Stasi of the Democratic Party, will collect dirt on Republicans under the pretense of national security then leak gossipy details to an always-compliant news media.

Journalists will then source the leaks to anonymous “intelligence officials” to legitimize any incriminating disclosures, which in turn will prompt Democrats to call for immediate investigations and criminal referrals—see the January 6 select committee for how this successful formula works.

In fact, an official from the Obama Administration, the birthplace of Russiagate and other political espionage efforts, is heading up the new endeavor.

“Major changes in the Capitol Police intelligence unit started in fall of 2020, when the department brought on former Department of Homeland Security official Julie Farnam to help run its intelligence unit, which is housed in its Intelligence and Interagency Coordination Division,” Politico confirmed.

Who is Julie Farnam? In October 2014, Farnam was hired by the Obama Administration to serve as the acting chief of staff for the Homeland Security department’s field operations in Washington, D.C. The following year, Farnam was promoted to senior advisor on immigration issues. According to her LinkedIn profile, Farnam represented the Customs and Immigrations Services at “high-level meetings within the Agency, Department, other Federal agencies, and the White House.” She also “briefed senior officials on matters with national impact or controversy.”

One senior official with whom Farnam presumably worked at the White House would have been Lisa Monaco, Obama’s Homeland Security Advisor during his second term. Herself a key architect of Russiagate and an unabashed partisan, Monaco now serves as the deputy attorney general, responsible for the Justice Department’s sprawling and punitive investigation into January 6. Monaco’s prosecutors are handling at least 730 criminal cases related to the Capitol protest, with new arrests announced every week.

Monaco’s street cred as a political operative is stellar. Chief of staff to former FBI Director Robert Mueller, Monaco is moving at open throttle not just to round up trespassers who objected to Joe Biden’s election but to hand down criminal indictments against Trump loyalists such as Steve Bannon and investigate alleged “fake electoral slates” in seven states sent to the National Archives in December 2020

Farnam seems to be following in Monaco’s footsteps—or taking her marching orders—to whip up frenzy about the imaginary threat posed by Trump voters.

In an interview earlier this month with CBS News, Farnam revealed her agency prepared an “special event assessment” on January 3, 2021 that warned of potential violence during the Electoral College certification. “Supporters of the current president see January 6, 2021 as the last opportunity to overturn the results of the presidential election,” Farnam wrote. “This sense of desperation and disappointment may lead to more of an incentive to become violent. Unlike previous post-election protests . . . Congress itself is the target on the 6th.”

Erroneously claiming “protesters plan to be armed”—the only person who used a firearm inside the building that day, ironically, was a Capitol Police lieutenant who shot and killed Ashli Babbitt—Farnam’s report relied heavily on bogeyman terms such as “white supremacists” and “extremists.”

She questioned the issuance of January 6 permits for “Stop the Steal” rallies, which, according to Farnam, attract bad actors who “actively promote violence.” Farnam must have missed all the videographic and social media evidence of how leftist activists attacked Trump supporters and police after previous Stop the Steal events in Washington in November and December 2020.

Seven Republican congressmen sent a letter this week to both sergeants-at-arms, the Capitol Police chief, and the architect of the Capitol to demand answers, insisting the new spy initiative “constitutes a dramatic and troubling expansion of the USCP’s authority.”

Like all inquiries sent to Biden regime apparatchiks, the letter will go unanswered. Farnam, another Obama minion who learned from the best how to aim powerful government tools at political foes, will accelerate her unchecked surveillance operation to complement Monaco’s January 6 criminal investigation and House Democrats’ January 6 select committee—all intended to produce damaging headlines for Republicans during the 2022 midterm elections.

After the Attack: The Future of the U.S. Capitol Police

It has been six months since rioters attacked the United States Capitol and our brave police officers and law enforcement partners who fought valiantly to protect elected leaders and the democratic process.

We will never forget USCP Officers Brian Sicknick and Howie Liebengood, who died after the attack, nor the sacrifices of the nearly 150 law enforcement officers who were injured.

Since that day, our team has been working with federal law enforcement agents to track down the suspects and bring them to justice. So far more than 500 defendants face charges.

Throughout the last six months, the United States Capitol Police has been working around the clock with our Congressional stakeholders to support our officers, enhance security around the Capitol Complex, and pivot towards an intelligence-based protective agency.

USCP continues to implement recommendations from a series of post January 6 reviews including;

Here are examples of the improvements the United States Capitol Police has made since January 6;

The USCP is working closely with the House and Senate Employee Assistance Programs, including their trauma informed counselors. The Department is working with the House and Senate Chaplain Offices to partner on spiritual support services. Organizations specializing in addressing psychological trauma and stress have been brought in. Law enforcement agencies and other organizations also generously provided members of their peer support teams. The USCP is developing its own internal peer support program. And finally, new wellness support dogs, Lila and Filip, will spread the message of wellness by helping engage the wellness team with our employees.

The USCP has enhanced our staffing within our Dignitary Protection Division as well as coordinated for enhanced security for Members of Congress outside of the National Capitol Region.   The Department is also in the process of opening Regional Field Offices in California and Florida with additional regions in the near future to investigate threats to Members of Congress.

The Civil Disturbance Unit has increased training, to include joint training with the National Guard, riot training, shoot/don’t shoot scenarios, and less-than-lethal exercises. The Department is also increasing its use of force, tactical, equipment, leadership, and incident command training. The USCP sent officials to attend CDU training in Seattle and Virginia Beach.

The Department solidified its new Critical Incident Response Plan, which establishes a multi-phased action plan to quickly mobilize local, state, and federal manpower, including the Department of Defense, to respond to planned and/or no-notice emergencies. It is also working with Congressional oversight and the Capitol Police Board to obtain the authority to immediately request National Guard assistance if needed without having to wait for board approval.

The law enforcement experts will address recommendations presented by the Government Accountability Office, the USCP Office of the Inspector General and various oversight committees to enhance the Department’s internal controls and processes. Their institutional knowledge will build upon USCP’s plan to improve operations, while moving forward along a new path towards an intelligence based protective agency.

Retired U.S. Secret Service Agent Wesley Schwark was also brought in as a contractor to assist with the now Department-wide operations planning process— another critical step to ensure a violent attack like January 6 never happens again.

The Department has acquired additional helmets, shields and less-than-lethal munitions, and has ordered more batons.

Through a loan from the Department of Defense, the USCP will have access to state-of-the-art campus surveillance technology, which will enhance the ability to detect and monitor threat activity.

Internally, the Department has vastly increased the information shared with sworn officers about obtained intelligence and event planning.

Externally, USCP leadership has increased intelligence sharing and collaboration between all of our local, state and federal law enforcement partners as well increased our partnership within the intelligence community and Congressional stakeholders.

The Department just launched a new recruitment effort, which includes the use of its social media platforms and traditional media.

Those are just some of the improvements the United States Capitol Police is making, with the support of our Congressional stakeholders, in the wake of the January 6 attack.

We honor all the brave men and women who, against all odds, faced down a violent crowd that day and protected our elected leaders and everyone who was in the Capitol Complex.

We will never forget their bravery and will continue to work in their honor.