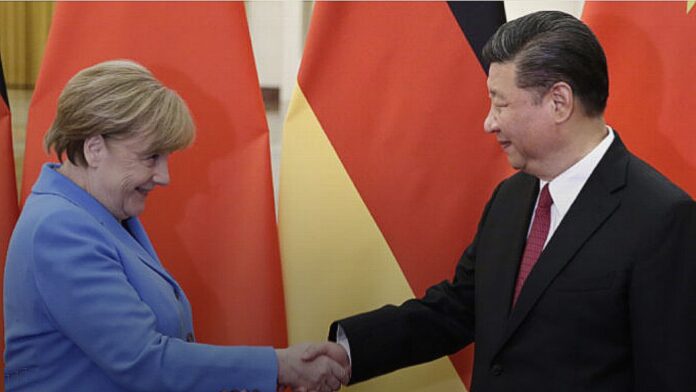 German Chancellor Angela Merkel is refusing to take sides between the United States and Communist China.

On January 26, 2021, at the Davos World Economic Forum in Switzerland, Merkel was asked about the growing rift between China and the U.S. and whether she would support one side over the other.

“I would very much wish to avoid the building of blocs,” Merkel responded. “I don’t think it would do justice to many societies if we were to say this is the United States and over there is China and we are grouping around either the one or the other. This is not my understanding of how things ought to be.”

Over the past several years, Merkel has slowly moved increasingly away from the West.  She has outright ignored U.S. and European demands to stop buying Russian gas in large quantities while steamrolling the construction of the Nord Stream 2 project. She’s ignored calls to increase Germany’s defense spending to the NATO-mandated 2% of GDP, hesitated to support the Democratic forces in Venezuela, and refused to shut down North Korea’s money laundering operation at a youth hotel in the middle of Berlin until a court stepped in (the hotel violated U.N. sanctions).

In the latter part of 2019, when President Trump jumped in to tackle the long-overdue Chinese manipulations of global trade and economic agreements, Merkel took a group of German business leaders to Beijing to sign trade deals. While the West, led by the United States, was finally trying to unite against Communist China’s currency manipulation and intellectual property theft, the leader of the largest economy in Europe was giving the Communists a lifeline – one that greatly benefited German companies.

Merkel’s latest rejection of Western values so as not to offend China’s Communist Party will certainly help her win friends and more business deals in China, but it also signals to Americans that the current German leader is focused on Germany First.

“The Chinese President spoke yesterday, and he and I agree on that. We see a need for multilateralism,” Merkel said.

By Richard A. Grenell, Special Advisor for National Security and Foreign Policy