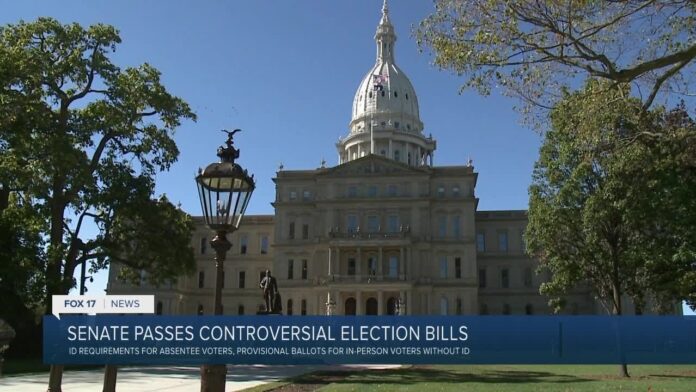 All Senate Republicans voted in favor of the three bills, while every Senate Democrat opposed them.

Current law stipulates that Michigan residents who don’t have photo identification when they vote in person can still cast their ballot if they sign an affidavit at their designated polling location. More than 11,000 individuals cast ballots this way during the Nov. 3 election, according to election officials.

With one bill, which passed in the Senate 19–16, that process would be barred, and voters who don’t have identification would have to cast a provisional ballot and confirm their identity up to six days after casting their vote.

The Senate also voted 19–16 to pass a bill that would mandate that applicants who seek absentee ballots provide their driver’s license number, their official state identification number if they don’t have a license, or the last four digits of their Social Security number. According to the legislation’s text, applicants could attach or present a copy of their identification to their applications.

Another bill that was approved by the Senate on June 16, again in a 19–16 vote, stipulates that voters who receive a provisional ballot have to be notified of the six-day requirement to verify their identity.

Gov. Gretchen Whitmer, a Democrat, is expected to veto the three bills. Previously, she’s expressed opposition to Republican-backed bills targeting the state’s voting laws and has pledged to veto them.

However, Republicans can circumvent Whitmer’s executive authority and can start a petition to create a ballot initiative for the three voting bills. They would need more than 340,000 voters to sign it.