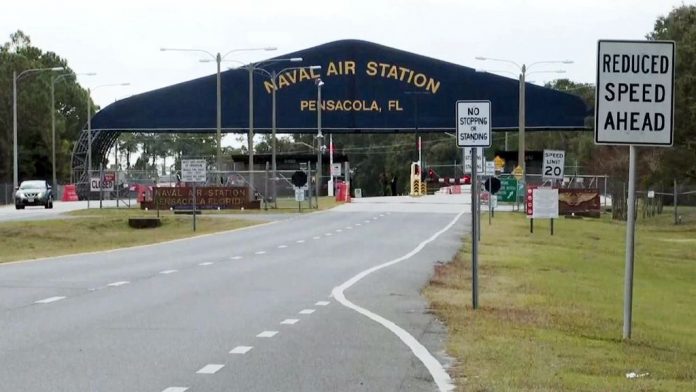 Miami (AFP) – A Saudi military student shooter reportedly condemned America as a “nation of evil” in an online manifesto prior to opening fire Friday at a US naval base, killing three people before being shot dead by police.

The shooting, which took place in a classroom building at Naval Air Station Pensacola in Florida, left eight others wounded, including two sheriff’s deputies who responded to the attack.

Florida Governor Ron DeSantis said the shooter was from Saudi Arabia — the same nationality as 15 of the 19 men involved in the 9/11 attacks, some of whom attended civilian flight school in Florida.

The SITE Intelligence Group, which monitors jihadist media, identified him as Mohammed al-Shamrani, saying he had posted a short manifesto on Twitter that read: “I’m against evil, and America as a whole has turned into a nation of evil.”

“I’m not against you for just being American, I don’t hate you because your freedoms, I hate you because every day you supporting, funding and committing crimes not only against Muslims but also humanity,” he wrote.

ABC News reported that investigators were working to determine if it was in fact written by the shooter.

The Twitter account that posted the manifesto — which also condemned US support for Israel and included a quote from Al-Qaeda’s deceased leader, the Saudi Osama bin Laden — has been suspended.

DeSantis told a news conference that “the government of Saudi Arabia needs to make things better for these victims. And I think they are going to owe a debt here given that this is one of their individuals.”

Commanding officer Captain Timothy Kinsella said the shooter was an aviation trainee, one of “a couple hundred” foreign students at the base.

Six Saudis were detained following the shooting, including three who were seen filming the entire attack, The New York Times reported, citing a person briefed on the initial investigation.

Read full article on Yahoo News using the link below:

Military base shooter assailed US as ‘nation of evil’