In Guiyang, the capital of southwestern China’s Guizhou province, there have been new reports of crack downs on underground churches by the Chinese Communist Party (CCP) after pastor Zhang Chunlei was placed under criminal detention in March.

In mid-March, Yang Kaichun and Hou Zeyan—house church members and residents of Anshun city, which is 90 kilometers from Guiyang—were each given 15-days illegal administrative detention, while Huang Chen and Cai Sumei had their homes searched by the authorities, who confiscated some of their possessions.

Other house church members—Chen Jianguo, Li Lin, and Li Jinzhi from Guiyang—were subjected to three-days detention as well as repeated summons and harassment by local police.

Yang Aiqing, wife to imprisoned pastor Zhang Chunlei, was also illegally subpoenaed and held in handcuffs and shackles for 24 hours before being released.

On April 27, Sui, on behalf of Christian Chen Jianguo, filed an administrative lawsuit against the authorities responsible for ethnic and religious affairs and public security in the Yunyan district, Guiyang city, in the court of Guiyang’s Nanming district. However, Chen’s case has been dismissed by the court.

In fact, the CCP regime has intensified efforts in persecuting underground Christians since Chinese leader Xi Jinping became leader in 2012. The CCP took down more than 900 crosses from state-run churches in the first half of 2020 in Anhui province alone, according to Bitter Winter, a magazine on religious liberty and human rights in China.

This 3 minute video is of an American pastor who met Christians in China and he shares about the underground churches in there. 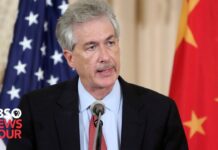 C.P.D.C. Calls for Resignation of C.I.A. Director Burns for Lying Over Ties to C.C.P. Influence Operations