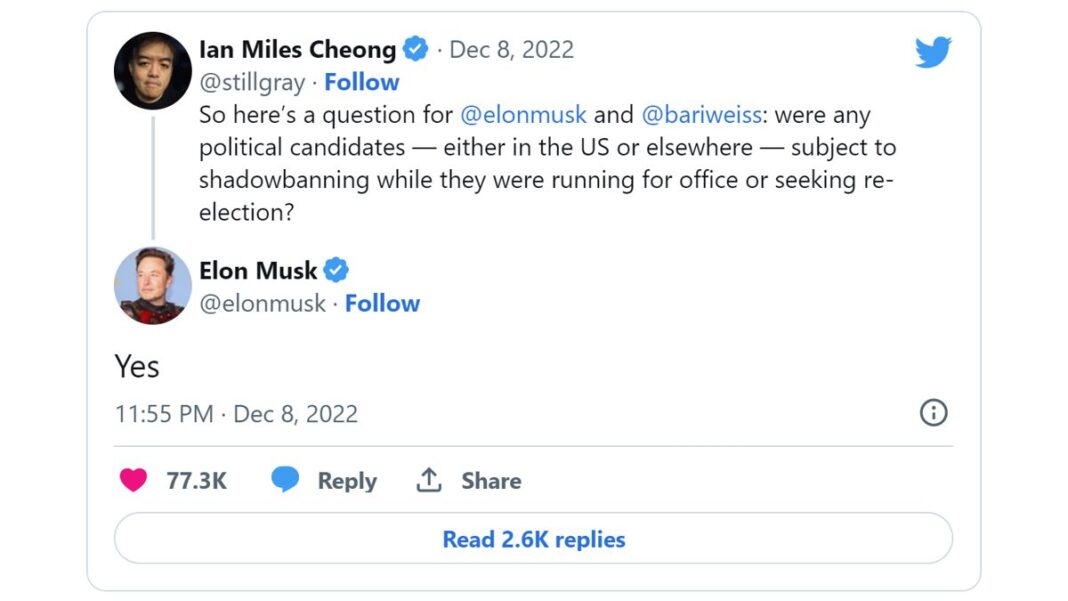 Elon Musk has confirmed that political candidates were shadow banned by Twitter while running for office, in the latest revelation on the social media giant’s meddling in conversations of public interest, including by putting disfavored users on blacklists and suppressing distribution of their tweets.

Following the release of the second part of the “Twitter Files,” which revealed the social media giant put users on secret blacklists and used other shadow banning tools, Musk was asked by political commentator Ian Miles Cheong if political candidates were also subject to such censorship.

“So here’s a question for @elonmusk and @bariweiss: were any political candidates — either in the US or elsewhere — subject to shadowbanning while they were running for office or seeking re-election?’” Cheong asked in a tweet, tagging both Musk and journalist Bari Weiss.

“Yes,” Musk replied, confirming that Twitter has, as many have alleged, put its finger on the scale of conversations that were of importance to public interest, including in the context of elections.

Musk did not go into further detail but he has previously said that Twitter had “failed” to be impartial in content moderation and “interfered in elections.”

“The obvious reality, as long-time users know, is that Twitter has failed in trust & safety for a very long time and has interfered in elections,” Musk said in a Nov. 30 post on Twitter.

In that message, Musk was responding to criticism from Twitter’s former head of site integrity Yoel Roth, who said during a recent interview at the Knight Foundation conference that he didn’t believe safety had improved on Twitter after Musk’s takeover.

Roth also said that he thinks Twitter blocking the explosive Hunter Biden laptop story ahead of the 2020 presidential election was a mistake.