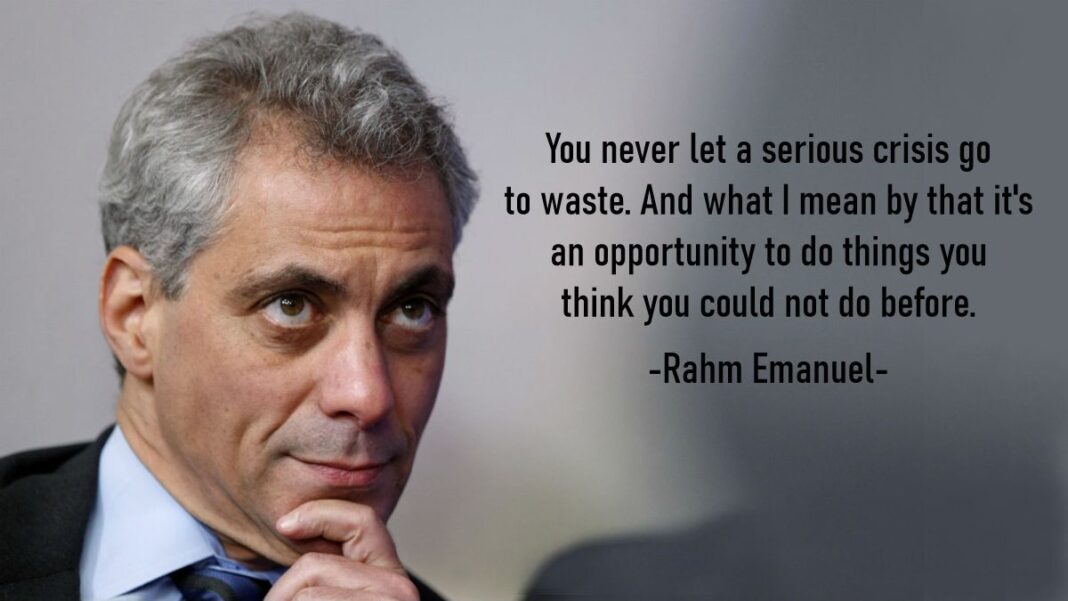 In the mid-1940s as the world approached the end of WW II, Winston Churchill is credited with saying “Never let a good crisis go to waste.” While Churchill was likely referring to the alliance between Roosevelt, Stalin and himself to form the United Nations, the broader meaning of the statement is that a crisis provides an opportunity to do what could not be done before the crisis. The federal bureaucracy is using the crisis of the pandemic to establish working from home as a right of employment. Congress, should use the same crisis, and the same arguments used by the bureaucracy, to reorganize the entire civil service.

As the federal government returns to work after the two years of “pandemic living” which allowed many in the bureaucracy to work remotely, our bureaucrats, with literally jobs for life, now want the right to permanently work from home. The bureaucrats argue working from home reduces traffic congestion, allows GSA to downsize office space between 20% to 50% of post-pandemic levels while reducing greenhouse gases. Moreover, workers argue it saves energy, increases worker productivity by having fewer distractions, and opens up the nationwide talent pool to government recruitment. All resulting in greater diversity, inclusion and equity. One study found “remote work is now the status quo for much of the federal government.” The same study noted “… 6 in 10 [workers] would take a pay cut” if allowed to work from home.

The studies on remote work open the door for Congress to reorganize the bureaucracy for the next century. Since the existing system is based on the Pendleton Act of 1883 and the Civil Service Reform Act of 1978, it is in serious need of reform if it is to function efficiently in a more complex society. Today’s civil service has literally life-time appointments. Federal employees are fired at the rate of 0.55%, a rate so low that deaths outnumber firings. Two significant agencies had zero firings. In addition to job security, the Congressional Budget Office found pay and benefits for bureaucrats 47% more than the combined pay and benefits in the private sector. A Cato Institute study put the number at 80% more than the private sector. The average federal worker receives $123,160 in pay and benefits compared to $69,901 in the private sector.

The fact that bureaucrats and their unions want to change where and how government employees work, opens the door for Congress to rid itself of a fossilized civil service system. To achieve a successful transition of the federal workplace will require opening the civil service to the new talent spread around the nation.

How does Congress achieve this reorganization?

Unfortunately, when it comes to bureaucrats, the U.S. Supreme Court ruled that they can only be dismissed from federal employment after a trial type hearing. This ruling makes discharging a bureaucrat almost impossible. It leaves two million civil servants in control of the spin on information given elected officials. In foreign affairs, these bureaucrats replace the President’s policy with policies adopted by interagency working groups. They write the hundreds of thousands of regulations, few of us read, but control our lives. Bureaucrats determine who of us acts lawfully or unlawfully.

These “lifers” fundamentally change the role of the President. Article II requires the President to execute the laws of the U.S., yet the President controls only 4000 appointments out of 2 million positions. 99.8% percent of the bureaucracy beats to its own drummer, and the Supreme Court protects their music. Many of these highly paid elites, believe “the public knows little or nothing” about issues facing the nation.

The worst part of the bureaucracy is that it hides behind statistically flawed, faux evaluations which give  99.5% of the 2 million federal employees a “fully successful” rating, or above. Of the 2 million bureaucrats, only 0.1% received unacceptable ratings. The cost of these federal bureaucrats is massive $66 million per hour.

The Solution: Term Limits for bureaucrats

If Congress is to reorganize the bureaucracy, it must place term limits on bureaucrats; perhaps ten years of service.   Term limits would have three major benefits for our country. First, it would break bureaucratic control of government by eliminating the power imbalance between elected officials whose service can regularly be limited by citizens and an unaccountable bureaucracy that can hold jobs for life. Second, with term limits, a greater number of Americans will be able to serve their country and reap the rewards of a federal job. Finally, term limits would reduce the number of bureaucrats qualifying for massive federal pension and health benefits, which now represents a $3.5 trillion unfunded liability.

The social and economic benefits of term limits on bureaucrats

With open positions, the federal government can hire talent on basis of ability, knowledge, and skills; from every part of the country. These new employees could even be located in rural and low-income areas that presently have few federal workers. One study estimated that 20% of federal positions (approximately 400,000 jobs) could be done effectively anywhere in the U.S. The study also finds that a more distributed workforce can combat “widening geographic inequality.”

As work is created in economically depressed areas, it will generate economic opportunities for these areas by attracting other professions wanting to provide services to the federal operations located there. By working in lower cost areas, the federal government can reduce its cost-of-living adjustments from 30.5% in a high-cost areas like Washington, DC to 16% in most of the U.S. While the federal government saves money, so does the employee living in low-cost areas.

The starting point to reorganizing the massive federal workforce is term limits on bureaucrats.